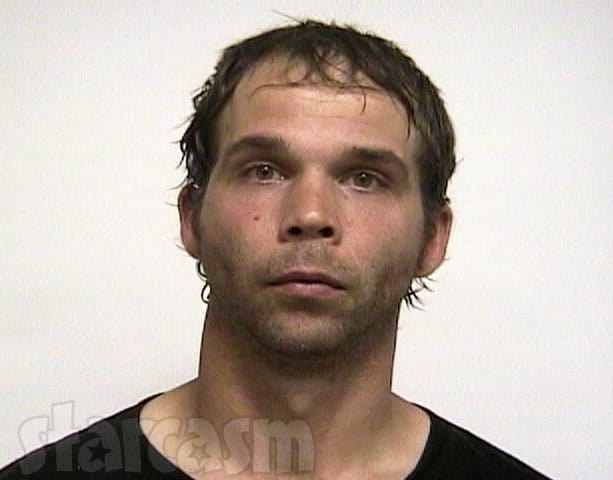 After marrying his wife Carmela and moving to Florida, it appeared that Return To Amish bad boy Jeremiah Raber had turned over a new leaf. But Jeremiah looks to be back to his old self, as he was arrested in Florida on Saturday and charged with domestic violence.

UPDATE – Read the police report from Jeremiah’s arrest here, which includes some startling accusations by Carmela.

The 37-year-old reality star was later released and he headed right to Facebook. “This time my demons have been woken up and they pronounced me the devil,” Jeremiah wrote yesterday. He then shared a lengthy post explaining that his troubles with Carmela were because he was looking for approval — from her and Facebook — and not love, because he’d never known what love was.

This is going to hurt to talk about but I have to get it out there.

I was adopted at a very young age because my mother didn’t want me. I was adopted into a very abusive home. I never felt love growing up. I was told on a daily basis buy my amish mom that I will never get anywhere in life. I fought tooth and nails for everything I had. I tried on a daily basis to get the approval of my parents just to be let down because it never happened. I was hurt by it all the time. I’ve tried to commit suicide numerous times to get rid of the pain of the past. I then got married thinking that would make it better but that ended up in a divorce. That raised the pain level so much that I hated everyone around me. I went out and tried drinking the pain away almost every single day. That just caused more pain for me and got me into a lot of trouble. I then ended up moving in with people who became like parents to me even though I never truly opened up to them and allowed them to show me true love. I ended up talking to this girl who changed my mind and showed me what Love Actually was. I ended up getting married to her and she was and still is the love of my life. We have had so much hurt and struggles in our marriage because I myself growing up had never experienced what real love was and because of that even tho I was married I kept looking to people on my Facebook for approval of everything that I did. That has ruined my relationship and marriage with my true love. I know that the way I come off to my wife is not a loving way but all I want is her approval. After having it drilled in my head my entire life that i will never amount to anything in life I have overlooked the love and looked just for approval. I got married to Carmela because I do love her even when I got mad at her. Me wanting approval so bad has made me overlook the love. I wish I could take it all back but I can’t. I wish that I had the chance now to show her that I do need her love and not approval. I guess my mother was right. I’ll never amount to anything. I am nothing without the love of my life. I do love you Carmela.

In addition to the posts above, Jeremiah shared the music video for Ricky Young’s “Could You Love Me Again,” and a spoken word piece titled “I’m past saving.” He also posted a text graphic with the message “Someone who truly loves you, sees what a mess you can be, how moody you can get, and how hard you can be to handle, but still wants you.”

Meanwhile, Jeremiah’s wife Carmela Raber appears to have deleted her personal Facebook account. However, a post she reportedly wrote after Jeremiah’s arrest is currently circulating on fan pages, and it paints a pretty ugly picture of her life with him: 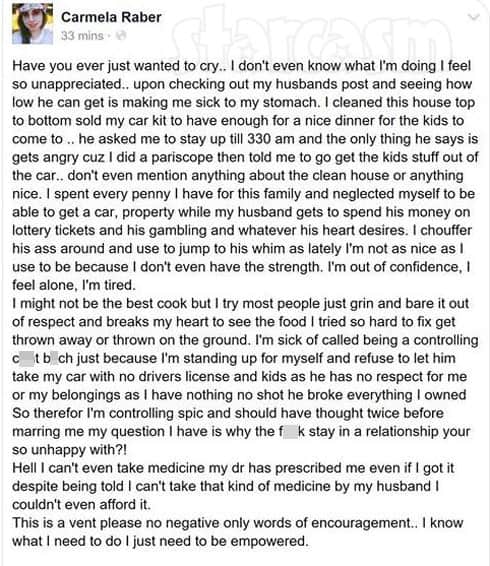 Have you ever just wanted to cry.. I don’t even know what I’m doing I feel so unappreciated.. upon checking out my husbands post and seeing how low he can get is making me sick to my stomach. I cleaned this house top to bottom sold my car kit to have enough for a nice dinner for the kids to come to .. he asked me to stay up till 330 am and the only thing he says is gets angry cuz I did a pariscope then told me to go get the kids stuff out of the car.. don’t even mention anything about the clean house or anything nice. I spent every penny I have for this family and neglected myself to be able to get a car, property while my husband gets to spend his money on lottery tickets and his gambling and whatever his heart desires. I chouffer his ass around and use to jump to his whim as lately I’m not as nice as I use to be because I don’t even have the strength. I’m out of confidence, I feel alone, I’m tired.

I might not be the best cook but I try most people just grin and bare it out of respect and breaks my heart to see the food I tried so hard to fix get thrown away or thrown on the ground. I’m sick of called being a controlling c*nt b!tch just because I’m standing up for myself and refuse to let him take my car with no drivers license and kids as he has no respect for me or my belongings as I have nothing no shot he broke everything I own. So therefor I’m controlling sp!c and should have thought twice before marring me my question I have is why the f**k stay in a relationship your so unhappy with?,

Hell I can’t even take medicine my dr has prescribed me even if I got it despite being told I can’t take that kind of medicine by my husband I couldn’t even afford it.

This is a vent please no negative only words of encouragement.. I know what I need to do I just need to be empowered.

There aren’t many folks who know Jeremiah personally who have great things to say about him (including himself), but pretty much everyone who knows Carmela has stated that she is genuinely kind and good-hearted. I recently made a post about the new season of Return To Amish in which I expressed my surprise at how well their marriage seemed to be going before wishing them continued happiness together. It seems their happiness was just a show. We wish Carmela all the best and hope that her relationship with Jeremiah doesn’t completely ruin her future — financially, emotionally, and otherwise.

Meanwhile, viewers will get to see some of the couple’s relationship troubles play out on screen when Return To Amish returns this Sunday at 7/7c on TLC. Click here to watch the dramatic preview trailer.