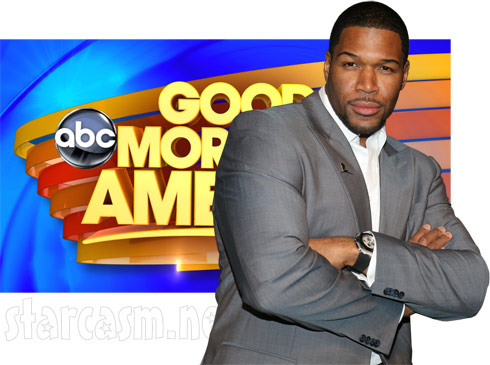 ABC’s Good Morning America continues its casting makeover! Sam Champion announced he was leaving to join the Weather Channel back in December, and it was only a couple of days ago that it was revealed Josh Elliot would be leaving to join NBC Sports after he reportedly could not reach a deal with ABC despite several months of intense negotiations. Now CNN is reporting that Live with Kelly and Michael co-host Michael Strahan is preparing to join the GMA crew!

Strahan’s addition to GMA will not be as a replacement for any of the current GMA cast, instead “he’ll be an addition to the top-rated show, popping up in various segments starting at 7 a.m. before shuttling one mile north to the talk show he already co-hosts at 9 a.m. with Kelly Ripa, Live with Kelly and Michael,” according to “people with knowledge of the network’s plans.”

As you may have ascertained, Strahan will not be leaving his job co-hosting alongside Kelly Ripa.

If the deal goes through, CNN says “Strahan will inject some metaphoric testosterone into GMA, which now has one man at the anchor desk, George Stephanopoulos, and four women.”

There has been no official confirmation from ABC or Strahan.