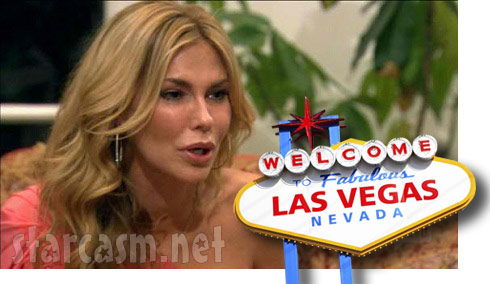 The cast of Real Housewives of Beverly Hills recently took a trip to Las Vegas. Kyle Richards, Yolanda Hadid and Lisa Vanderpump accompanied Brandi Glanville, who was in town prepping for her new hosting gig. They were also joined by friends Camille Grammer, Jennifer Gimenez, and Marisa Zanuck. Although the trip was meant to be a fun getaway, there was a LOT of drama!

“The ladies were bickering and going at each other’s throats from the moment they left Los Angeles, and didn’t stop until their private jet brought them back home,” a show insider told Radar Online. “Brandi appeared to be under the influence of alcohol the entire time and was acting pretty outrageously.” Brandi is known for being a spitfire and has never held back when it comes to her thoughts on the fellow cast members.

“There is a lot of bad blood right now among everyone, and it all came out during the trip. Brandi has gone after Adrienne with a vengeance this season because Brandi is now really chummy with Lisa, and Adrienne and Lisa just don’t get along.” Although Lisa and Adrienne used to be close, their friendship came to an end on the season 2 reunion — and fans saw it all. Brandi even recently accused Adrienne of planting false stories about her in the press.

“Even though Adrienne didn’t go to Las Vegas, Brandi kept bringing her name up and trashing her, and it just wasn’t necessary. Lisa and Brandi are just out of control this season with the bitchiness, and viewers are going to be shocked when they see their behavior on camera.”

I don’t know about Lisa, but Brandi has a history of going a little wacky in Vegas!

Real Housewives of Beverly Hills season 3 will return to Bravo later this year.