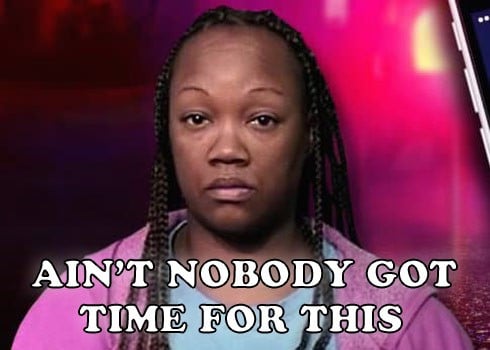 Crenshanda Williams, a former 911 operator from Houston, Texas, is alleged to have deliberately hung up on hundreds of calls.

The 43-year-old appeared in court today on two misdemeanor charges of interfering with an emergency call. According to court documents, Williams told police that she hung up on people because “she did not want to talk to anyone at that time.” In one brief conversation Williams can be heard proclaiming “ain’t nobody got time for this” while hanging up on a caller.

An investigation was launched after supervisors realized there was an alarming amount of calls on her log that lasted under 20 seconds.

The Houston Chronicle reports that prosecutor Claire Morneau stated that investigators have already identified approximately 825 calls in which Williams hung up and the same person called back within 5 minutes.  “Since the case has been filed more people have called and of course we will be following up with those individuals,” Morneau added.

For one of the two instances in which Williams currently a charge, she hung up on a man reporting an armed robbery at a convenience store. On the first dial Williams immediately hung up. When the man called back she was informed that there was an armed robbery and she merely sighed before hanging up again. On his 3rd call he got someone else and was able to report the crime.

When officers finally arrived a store manager, a father of four, had died from gunshot wounds.

If Williams gets convicted, she will face up to a year for each charge.