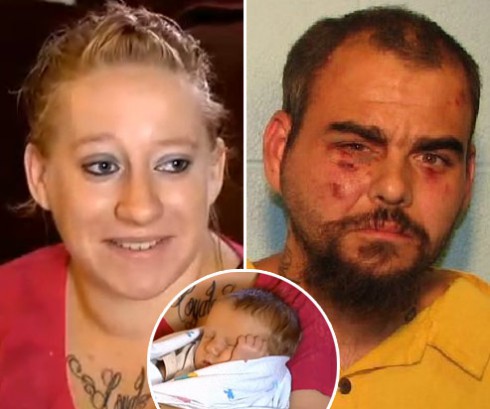 Lessons to be learned from the following story…

1) Don’t mess with a pregnant lady.

Kristen Thompson from Flint, Michigan headed to a local grocery store to do a little stocking up the day before a scheduled C-section for her son Joseph. 30-year-old Mark Newton was on hand and figured he had found himself an easy target as he attempted to snatch Thompson’s purse away from her. He was wrong.

Thompson, already a mom of two, didn’t hesitate to chase after Newton even though she was 9-months-pregnant. “My purse is my life. It has everything and anything that you can need, possible. Comes down to bills, the kids’ insurance cards,” she told ABC12.

She was able to catch up with the jerk and when she did, he pushed her down to the ground and she has the scrapes to prove it. Thanks to some friends at the scene who were playing hoops, the attacker now has some scars of his own. “I was like, ‘Hey grab him, he has my purse.’ And they all just turned around and seen that it was me, and they ran over there,” she added.

Police took Newton to jail and all the ruckus sent Thompson into labor so she headed directly to the hospital. 5 hours later, after an emergency C-section, Thompson was holding newborn Joseph in her arms.

Newton is being held on $8,000 bond. Thompson says she wasn’t scared but she was upset that no one in the parking lot at the grocery store intervened.