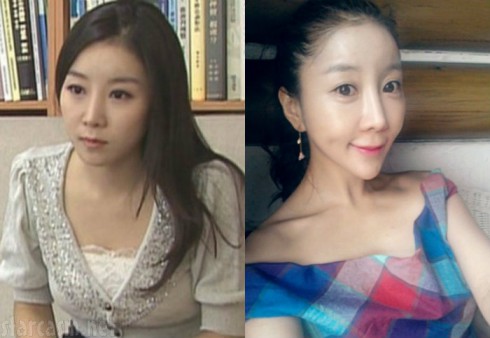 There are new photos circulating of a woman — identified only as a television reporter in South Korea — who supposedly underwent a rather extreme plastic surgery procedure to get a heart-shaped face.

The headlines on multiple major sites say this woman (shown above) “ruined her looks” with the cosmetic procedure. Among South Koreans, however, cosmetic procedures similar to this are more or less the status quo.

“In Korea, we call doing your eyes and nose the basics. They’re the standard procedures,” a South Korean woman told Vice in May 2013. “That’s nothing. So many people do it that it’s got to the point where people say things like, ‘But you only got your eyes and your nose done, it’s not a big deal.'”

The statistics seem to reflect that nonchalant attitude: An estimated one-in-five South Korean women gets plastic surgery at some point in her life. Many men also go under the knife. This gives South Korea the highest per capita rate of cosmetic surgeries in the world. 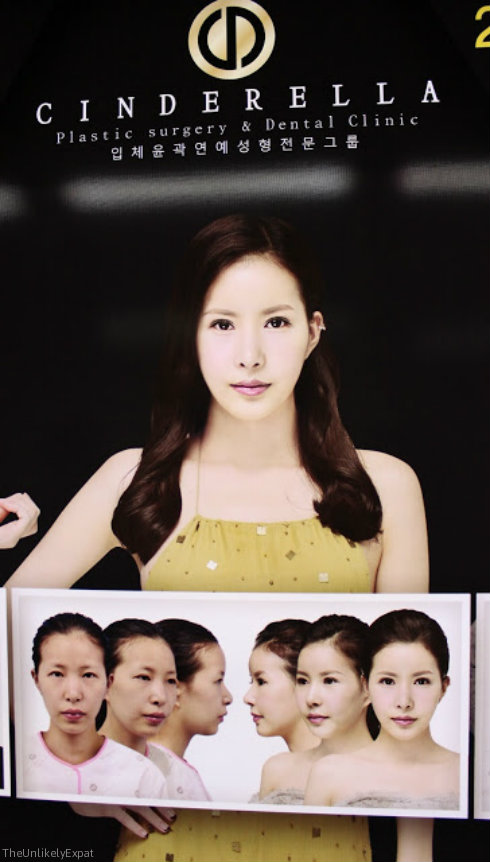 ^ Advertisement spotted by The Unlikely Expat in a South Korean subway station.

It seems those statistics are unlikely to change any time soon. Julia Lurie, an American teacher based in a mid-sized South Korean city, told This American Life in January 2013 that plastic surgery is widely accepted among her teenage students. Many even plan to use their first procedure as a reward for doing well on school exams. She added there were full-length mirrors and scales on every floor of her all-girls school. The majority of her students also carried small compacts so they could regularly check their reflections.

But, as Julia explained, the girls’ obsessions weren’t entirely superficial.

“When you are applying for university or you’re applying for a job here, you put a picture of yourself on your resume or your application. And it is sort of taken for granted that how you look will often go into the decision of if you get into that university or if you get that job,” she said. “I’ve had it explained to me as, if they have two equal candidates, like otherwise equal candidates, then the prettier person will get the job.” 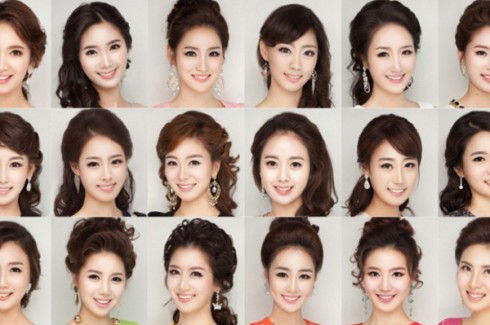 ^ This composition picture of candidates in a South Korean beauty pageant went viral last year. Many people commented that the women look identical.

So, what is the image of “perfection” that young South Korean women (and men) strive to obtain? In a conversation with her class that Julia recorded for This American Life, the eager students said a beautiful woman has white skin, big eyes, a v-shaped face, a tall, thin frame and big breasts.

Speaking to the New York Times in 2011, Dr. Park Sang-hoon also said most South Korean women are in agreement about the most desirable features.

“The consensus, now, is a smaller, more sharply defined youthful face — a more or less Westernized look,” said the Seoul-based doctor. “That makes 90 percent of Koreans potential patients because they’re not born with that kind of face.”

As for what Julia learned by talking to the students in her “smartest class,” she admitted their conversation helped her understand the girls’ perspectives: “I can imagine being here, growing up here, and just if this was one of the things that you had to do to succeed and do well, I’m sure I would consider it, too.”