Teen Mom OG dad Gary Shirley has lot going on! In addition to his return to reality television and preparing to be a dad again with girlfriend Kristina, the charismatic 28-year-old is testing the entrepreneurial waters by offering condoms and cookies — and he’s going to need to sell a lot of both because Gary has just bought his first house!

Gary actually closed on the purchase at the end of last month, as evidenced by a tweet from his daughter Leah’s Twitter account (run by Gary) on March 31 and retweeted by Gary:

Gary later shared a photo from the actual closing process in which he revealed he may also have a future in comics:

Fast forward to last night and Gary shared the first photos of his (and Leah’s) new home! Here is an exterior shot: 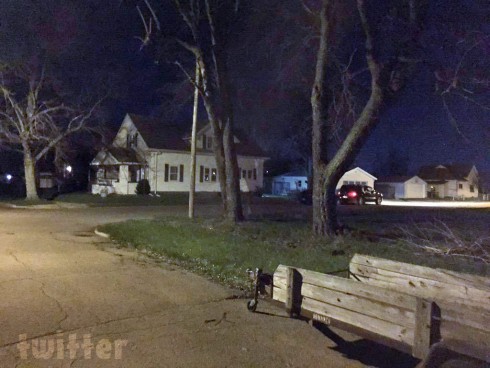 And here are some interior photos in which you can see Gary going through the process of removing some floral wallpaper:

On a side note, Gary’s tweets about the home purchase sparked an interesting conversation with a Twitter follower in which Gary answered numerous accusations:

Twitter User: amber paying for that too? u asked her for a grad while in prison and used it for another girl? pos!

Twitter User: so amber lied in her book? she wrote that u asked for a g for house for ya’ll n spent on one for u an ol girl

Gary: yepp! Along with other lies, but I’ve already discussed it w her! How would she know what spent it on? I paid for phone charges which was $15 dollars a day I made her car payments which was about to get repossessed…spent 4500 on her car she gave me back 4,000 plus 3,000 for child support, she had no bills I was paying rent, 2 car payments, 2 Insurance’s plus electric & food and daycare! so poor amber paid me a little money totaling 2500 extra then what she owed! Yeah kids cost more than 2500 right? so I’m pretty sure your still an idiot for listening to some BS someone says to make someone look bad, shows edited!!!

Twitter User: innnteresting, can see that. i know filming was awhile ago so i hope u already cut the flirting out, if i were kristina i’d be so upset seeing u do that and talk bout getting back w her, girls r sensitive dude! she seems like a sweet girl, be nice! an she shouldn’t have to avoid amber at her kids’ school and own home, amber needs to stop that

Gary: see your not an idiot I apologize! All is edited and yes I did tickle, but Kristina and i had issues. But more to it

Twitter User: lol it’s not just from the show i’m drawing conclusions from, it’s the book too, her saying u cheated multiple time and the scene where she walked in on u on the phone and u told her she was hurting the girls’ feelings. def made u look reaaally bad. if it’s not true i’d let the public know cuz that’s messed up, really changed opinions on u

Gary: the show is teen mom! So it’s in ambers favor, ambers voice is heard more by book, I don’t have a book people pretend.

[Someone asks “Do you work?” bu tit is unclear if the question was intended for Gary or the woman he was conversing with.]

Twitter User: me? yea that’s y i was off twitter after 5, access to pc 8-5 mon-sat while workn. idk if gary does besides show…i think he was a nice guy who suddenly had girls after him for fame n money n let it go to his head…makes me hate girls worse cuz who goes after a family man jus cuz he’s on tv? he prolly didn’t know whether to sh!t or go blind lol. but if amber’s lying bout the cheating his side should be told

Gary: just an fyi. Her and I got together after show was done for. She’s really awesome.

Twitter User: seems like it. but amber said ya’ll were together while u were telling her u were gonna b w her…even if that’s true it’d be ur fault not kristina’s, doubt she’d know u were tellin amber that u’d think amber’d be grateful she helps so much and is good to leah but not at all. bein a brat but yea kris seems so sweet, idk if or why u’d think about going back to amber Don’t Do It lol

Catch more of Gary (and Leah and Kristina and Amber) on new episodes of Teen Mom OG airing on MTV Monday nights at 10/9c.

Farrah Abraham reacts to James Deen rape allegations: ‘I TOLD YOU SO’