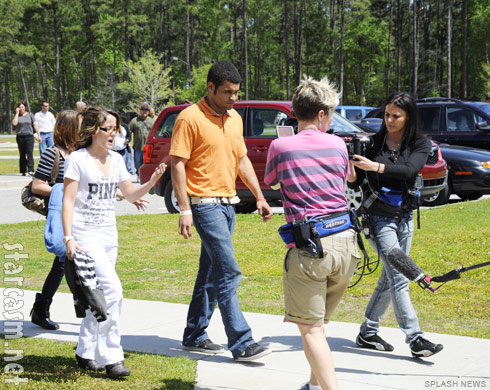 As reported earlier, Teen Mom 2 star Jenelle Evans and her boyfriend Kieffer Delp were in court today to face charges of breaking and entering as well as possession of a controlled substance and drug paraphernalia stemming from an arrest last year featured on the Season One finale of the MTV reality show.

Jenelle pleaded guilty to the drug paraphernalia possession charge and the other charges were dismissed. The judge ruled that if Jenelle served 24 hours of community service the possession charge will be dropped. That sounds easy enough, but I think we all know how hard it will be for Jenelle to show up to work three days in a row! There are also reports that she received one year of probation, which Lindsay Lohan has taught us can be an important thing to remember because it makes any trouble Jenelle gets into during that time exponentially worse!

As far as Kieffer goes, he walked away scott free according to Splash News. Kieffer must have revealed to the court his credentials and that he had Delpermatic immunity for any and all crimes involving marijuana or being on someone else’s property.

The two were photographed outside of the courtroom looking quite happy about the decision as and MTV camera crew recorded the moment for Season 2 of Teen Mom 2. Jenelle is scheduled to appear back in court in one year as a follow up. Of course, the troubled teen will be back before then to face charges stemming from the infamous “Teen Mom Brawl” as well as anything else that comes up in the next twelve months!

UPDATE – It seems Jenelle does understand how serious being on probation is! CLICK HERE to watch a video of her getting very emotional with Kieffer in her car immediately after their court appearance.