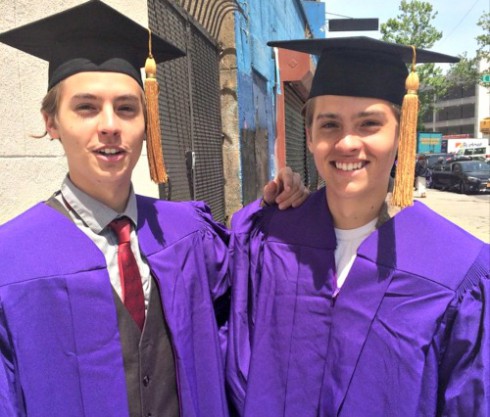 Former Disney stars Dylan and Cole Sprouse both graduated from New York University today–years after walking away from other acting offers to pursue higher education.

Dylan and Cole rose to fame in Grace Under Fire before starring in Big Daddy and later The Suite Life of Zack and Cody. Dylan previously said they left Disney when the network refused to give them producing credits. Although some nude photos of Dylan were leaked in 2013, the twins have largely avoided the pitfalls that are notorious for claiming former child stars.

Earlier this month, Cole revealed he and Dylan were both graduating with honors. He said in another tweet that he planned to think about his “next steps” after graduation.

We just graduated! Dylan bit me right after the last pic. #NYU pic.twitter.com/xTb8g1YNW6

But worry not, Disney fans. Despite now being college grads, Dylan and Cole haven’t forgotten where they came from, based on a photo from their recent reunion with Suite Life co-star Phill Lewis.

Congrats to Cole and Dylan on their accomplishments!

Where are the original FOR THE STRAIGHT GUY guys now?