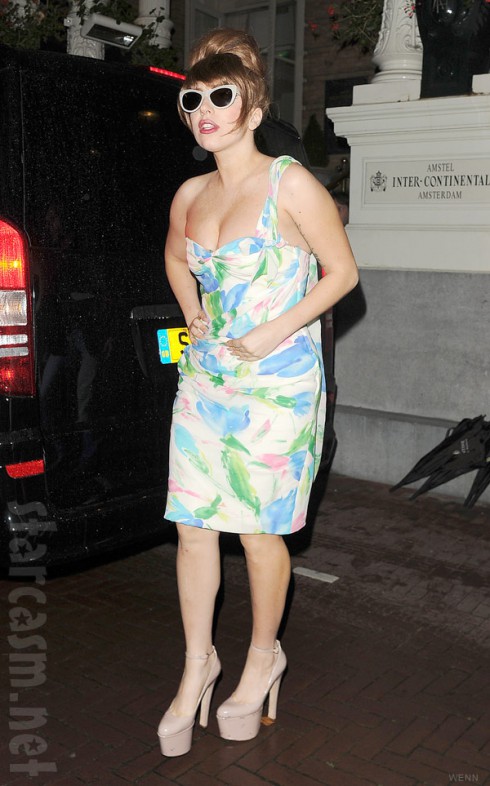 Lady Gaga is known for her ever-changing appearance and while we’re used to seeing her trying new things, recently it looks like she’s trying out a new size. This morning on Elvis Duran’s morning show, the singer addressed her recent weight gain and revealed what she’s doing to get back in shape.

“I’m dieting right now, because I gained, like, 25 pounds,” she tells Elvis Duran in a new interview. “And you know I really don’t feel bad about it, not even for a second. I have to be on such a strict diet constantly. It’s hard because it’s a quite vigorous show, so I tend to bulk up, get muscular, and I really don’t like that. So I’m trying to find a new balance.”

^ On the left is Lady Gaga from earlier this week (Credit: Will Alexander / WENN.com), the photo on the right was taken in June, 2011 (Credit: Jackson Lee / Splash News). Obviously Gaga’s skyscraper platform shoes make her look even thinner, but I think you can still see the difference clearly.

While Lady Gaga loves to party, and that includes plenty of booze, she insists that alcohol doesn’t have anything to do with her recent change in size. In fact, the reason for her weight gain is quite simple — she loves food. Plus, the singer’s father just opened up a restaurant and his need to feed his daughter has her bulking up.

“I love eating pasta and pizza,” she says. “I’m a New York Italian girl. That’s why I have been staying out of New York. My father opened a restaurant. It’s so amazing…. It’s so freaking delicious, but I’m telling you I gain five pounds every time I go in there. So my dad wants me to eat at the restaurant, and I’m like, I’ve got to go where I can drink green juice.” Can you say “Papa, papa, papa pasta!”

Not that it’s in any way related (or is it?) but.. During Tuesday night’s performance in Amsterdam, Lady Gaga lit up a joint on stage, telling her audience that she’s a fan of “wondrous marijuana” and adding, “I want you to know it has totally changed my life. It has been a totally spiritual experience for me with my music.”

Lady Gaga to sing from space during 2015 music festival

Gaga gets heat for tweet about what she doesn’t eat