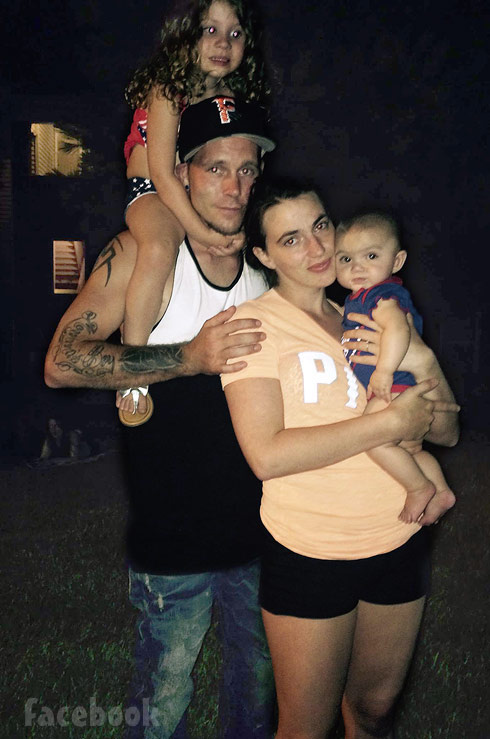 The Gypsy Sisters rumor mill exploded this weekend, after show star Mellie Stanley shared a photo on Facebook featuring what appeared to be a wedding ring. Stanley then announced she is pregnant with her third child!

Above is the photo; you can see the ring on Mellie’s left ring finger. (If you were wondering, that’s her baby daughter Brandy, her niece Demi, and her boyfriend/fiance/[husband?] Skott Vuncannon with her.) The photo was later shared on the Gypsy-Gossip2x Facebook fan page, which Mellie frequents, and led to great speculation about Mellie’s ring–as well as Skott’s ring, which is visible in another photo.

One commenter claimed that Mellie and Skott were seen at the courthouse together and they are already married. Mellie, using Skott’s Facebook account (Gypsy Sisters gossip tracking is never uncomplicated!), replied to the marriage rumors by writing: “I’m sure if I was legally married ppl would have done posted pictures just like they do when we film and it wouldn’t have been a secret this long.” She later added, “I don’t care ppl can say what they want YES WE WILL BE MARRIED VERY SOON BUT WE ARENT YET.”

She then added a photo of an engagement ring to reinforce her point and clarify that she was not wearing a wedding ring in the photo above: 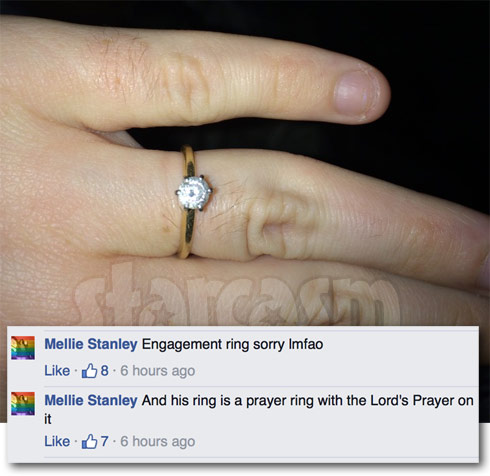 “Engagement ring sorry lmfao,” Mellie wrote. And she said of Skott’s bling, “his ring is a prayer ring with the Lord’s Prayer on it.”

The photo also had some people wondering whether Mellie is pregnant. (Good ol’ tactful internet.) Surprisingly, Mellie seemed to confirm that suspicion on Facebook! “Omg I’m sorry I kept it in to long,” she wrote, before hitting the caps lock key and adding, “I AM PREGNANT VERY EXCITED.” Here’s a screen cap:

Mellie has added nothing on her own Facebook page in response to the many comments, but she did reply to a commenter named Melissa on the Gypsy Gossip page. Melissa asked “If your not married are ya’ll preggers?”

Mellie responded, “No Melissa I’m not I was being a smart ass.” She revealed that she is currently on birth control, but doesn’t rule out a third child at some point down the road. “I have the depo shot,” she explained, “and not getting pregnant until my 2 babies are in school.”

So, from what I can tell, Mellie IS engaged to Skott Vuncannon, but she is not already married, and is not currently pregnant. But still, the engagement means congratulations are in order! Oh man — could we have ANOTHER Mellie Stanley wedding coming soon to Gypsy Sisters? I don’t think the world (or Sondra Celli) could survive! 😉

Meanwhile, be sure to keep up with all the on-screen Gypsy Sisters antics with new episodes airing every Sunday night at 10/9c on TLC.

UPDATE – It has since been confirmed that Mellie Stanley IS married to Skott Vuncannon and the two tied the knot in late May. Unfortunately, the confirmation came via a police report from an incident in which Skott reportedly killed Mellie’s puppy by throwing it against a wall during an argument. Click the link for all the details.