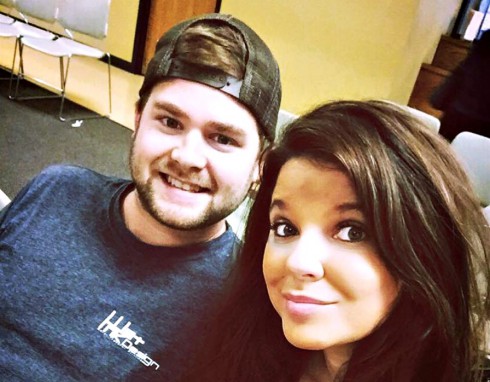 One unexpected person was laughing when Brad Paisley took a direct jab at the Duggar family during last night’s CMA awards — cousin Amy Duggar’s husband, Dillon King. However the humor of the CMA joke about Josh Duggar seemed to wear off pretty quickly, considering Dillon deleted his post calling the joke the “best thing ever” within hours.

The joke had quite the set-up: During the opening monologue with Carrie Underwood, Brad asked, “Carrie, have you heard that duet Blake did with Ashley Madison?”

“No, no, that was Ashley Monroe,” Carrie replied.

“Have I been going to the wrong site? We don’t have to be lonely at farmersonly.com…. And your sister, too. Your cheating side will tell on you… Josh Duggar.”

That is, of course, referencing the two big scandals related to Josh: First that he molested four of his sisters as a teenager and then that he cheated on wife Anna Duggar by using Ashley Madison. And, although Josh is the one to blame, Brad’s joke was a bit risky because it involves the people the former 19 Kids and Counting star victimized. Nonetheless, new in-law Dillon thought it was funny.

“@bradpaisley you are the man!!! #bestthingever #cmt #cmtawards,” Dillon said on Instagram, where he shared a video clip of Brad’s joke. After getting backlash, Dillon deleted the post without comment. In a possible follow-up, wife Amy shared a photo late, late last night that could mean she’s standing by her cousins.

This isn’t the first time Dillon’s gotten in hot water while weighing in on Josh. Back when the molestation situation was revealed, Dillon publicly thanked Jesus that Amy wasn’t one of the victims. Dillon defended himself even when commenters called the post insensitive.

Did Anna Duggar have another baby on the DL?