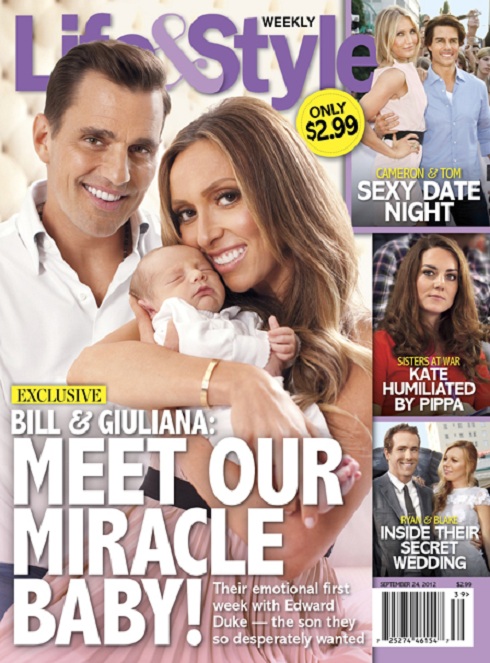 Bill and Giuliana Rancic struggled for years to have a child and now that they finally have a healthy baby boy, they are over the moon and happy to share Edward Duke with the world. Their little one, whom they call Duke, arrived just two weeks ago and already, the two are thriving in their new roles as parents.

“I had always heard that when you have a baby it completes your life — and it’s true,” Giuliana tells Life & Style. “I love my baby, and I love my new role.” Bill adds, “Every day he’s changing — it’s just remarkable to see. [He’s] got Giuliana’s dimples!”

Bill admits that although he knew his wife would make a great mommy, it still brings tears to his eyes to see her caring for his son. “It’s amazing how maternal instincts have taken over, and Giuliana’s just supermom.” Bill often teases his wife about how excited she is to change their son’s diapers, but she explains that after waiting so long to have a baby of her own, she loves every part of mommy duty. “It’s like the littlest things that make me happy — happier than I’ve ever been,” she reveals.

The couple had struggled for years to have their own child and after undergoing several unsuccessful IVF treatments, Giuliana was diagnosed with breast cancer. In December of last year, doctors performed a double mastectomy to be sure that the cancer would never return. After putting conception on hold, Bill decided they should look into a surrogate and it didn’t take long before they found a carrier and welcomed Edward Duke.

“I couldn’t believe that all those years of struggling and the tears actually paid off,” Giuliana concludes. “Every shot, every doctor’s visit — in the end, when you’re holding your baby in your arms, you forget it all, and it’s worth it.”