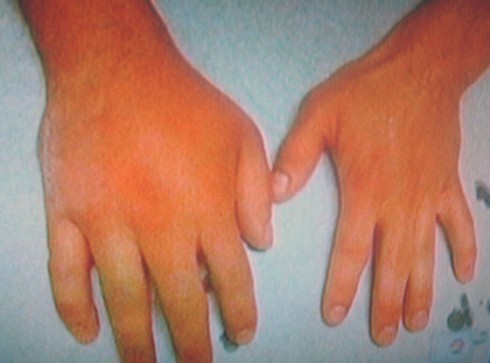 Zac Efron showed off his broken hand at Live with Kelly and Micheal. It’s about twice the size of his other hand after he broke it a couple of days ago stage fighting James Franco on the set of Townies.

He told Kelly Ripa and her fill-in co-host Carrie Ann Inaba “I had to go back to work so I couldn’t really wear a cast. So they put like a titanium plate in it and a bunch of screws.”

“I don’t know why I’m telling you this,” he said. “My hand in theory is back to normal, it just looks really gross.”

Townies is a comedy about a frat boy’s behavior affecting his neighbor’s family and also stars Seth Rogen and Rose Byrne.

Zac Efron involved in melee on skid row in L.A.

PHOTOS Tori Spelling and James Franco in Lifetime’s Mother, May I Sleep With Danger? remake

North Korea will get “merciless” if Rogen, Franco film released