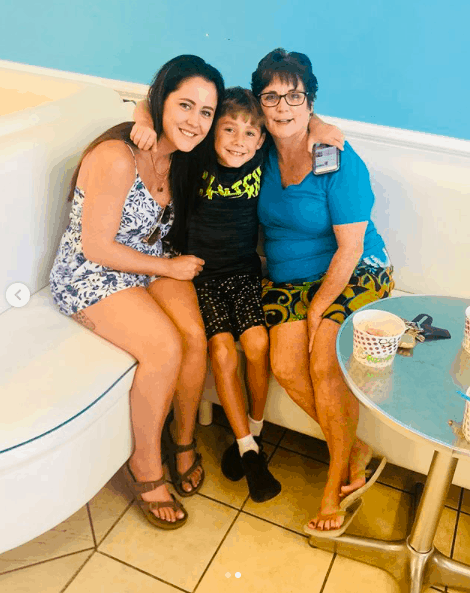 Jenelle Eason spent some time with mom Barbara Evans this Friday for the sake of her 9-year-old son Jace. She posted a sweet photo posed in a yogurt shop with the three of them and the caption “Whatever makes him happy.”

Things have been acrimonious between Jenelle and mom Barbara for a while. Barbara still has primary custody of Jace and hasn’t been too happy with Jenelle’s husband David Eason. Barbara was even barred from attending their wedding last year. They’ve apparently started patching up their rocky relationship. “Guess who gets along now? Babs and David,” Jenelle recently tweeted. “That took forever. #Annoying.”

26-year-old Jenelle later shared this video of herself stopping by the side of the road to dance to Drakes “In My Feelings” to “show the kids their mom still has dance moves.”

My turn! Showing the kids their mom still has dance moves. ???? (Car was in parked and we were on the side of our road) #InMyFeelingsChallenge #InMyFeelings #Drake #MomsCanDanceToo #HavingFun #BeingSilly #LatePost