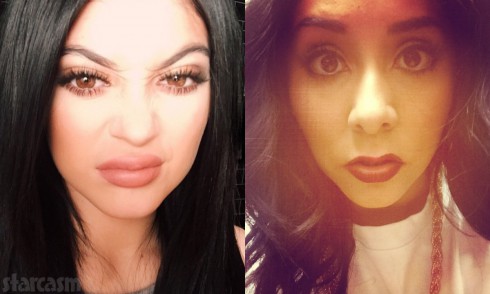 Kylie Jenner’s combatted the never-ending barrage of rumors that she got lip injections by saying that nope, her full pout is only because of some creative makeup techniques. But, as Snooki found out, it really isn’t that easy!

“Tried to do Kylie Jenner lips,” Snooki said on Instagram of the top picture of her. She added a series of crying emojis to drive home the point that the experiment was a laughable failure.

Although Snooki didn’t quite get the hang of it, several makeup artist have shown it is possible to recreate Kylie’s pucker by “overlining.” One of the best tutorials is from YouTube’s Desi Perkins, even though she warns she even looked like a duck the first time she gave the method a try.

“Those are lip injections,” Snooki said of Kylie in a December blog post. “She definitely got a little bit but a lot of it is the liner. But I’m thinking of getting a little thing in my lip, just a little squirt on the top because I don’t have a top lip.”

Snooki quit drinking after smelling booze in her breast milk

PHOTOS When Kylie Jenner steals your Coachella look! PLUS, where can you buy it?