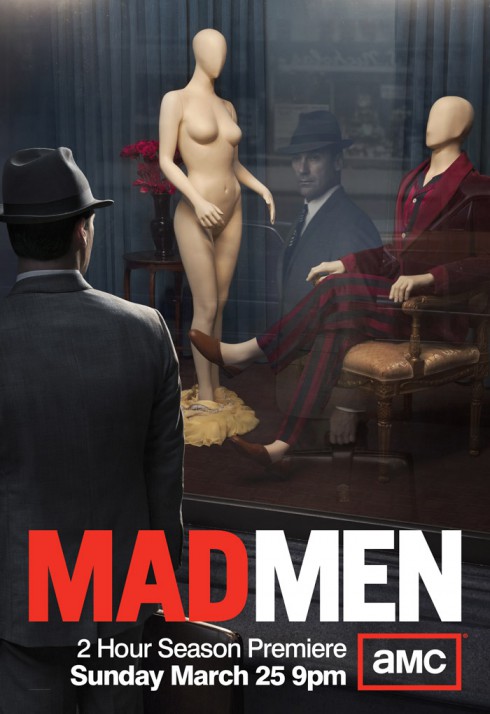 AMC (accidentally?) stirred up a little bit of controversy last month when it released a promotional poster for Season 5 of Mad Men featuring the silhouette of a falling man in a suit on a white-to-gray gradient background, which for some people brought to mind the tragedy of 9/11. (You can read all about the hubbub HERE. I still think the connection is a reach.)

But that teaser poster was just that – a teaser. It was basically a premiere date delivery mechanism. But now we have the Full Monty in the form of the official Mad Men Season 5 poster! (Click the image above to enlarge)

The end result is a psychological tour de force as Jan Hamm’s character Don Draper stares at his own reflection in the window of a department storefront display. His reflection is framed in by a domestic scene that features a seated man wearing a pair of elegant burgundy and black striped pajamas with a Hugh Hefneresque burgundy smoking jacket and slippers. Standing next to the man is a nude (and eerily realistic from the neck down) female mannequin who looks to have just disrobed as a pool of lacy yellow material has fallen down around her feet.

So what do you think the poster is trying to say? Is it commentary on the perceived roles of men and women in marriage in the 1950s and ’60s? Is it an existential Walker Percy moment in which Don Draper catches a rare glimpse of his true self almost by accident? Is it just a wonderfully stylized retro image composed of elements meant to make you wonder what it means without it actually meaning anything?

Ahhhh… Mad Men. The cure for the common promo poster 🙂

Feel free to offer up your analysis below. (If it helps, the store across the street reflected in the window is S. Nicholas. Saint Nicholas? Ho ho ho!)

PHOTOS: Is Jim Carrey mourning his loss of Jenny McCarthy with art therapy?

Is Jon Hamm’s girlfriend trying to get him to wear underwear?