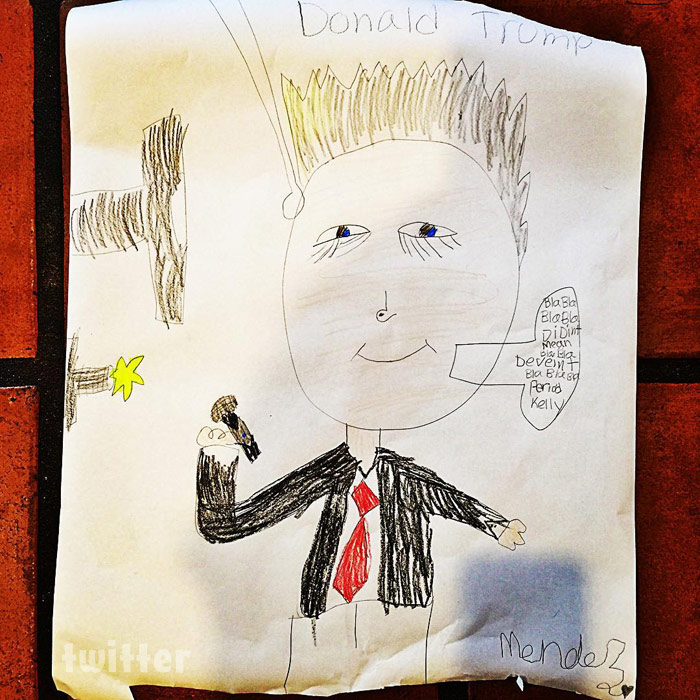 The internet is chock full of Donald Trump detractors. But few people have taken down the chronic foot-in-mouth sufferer and attention addict as artfully as Dr. Jenn Mann’s eight-year-old daughter Mendez. Mendez nailed Mr. Trump and his laughable campaign to become the next President of the United States in a simple drawing her mother shared proudly on Twitter.

Here’s a zoomed and cropped look: 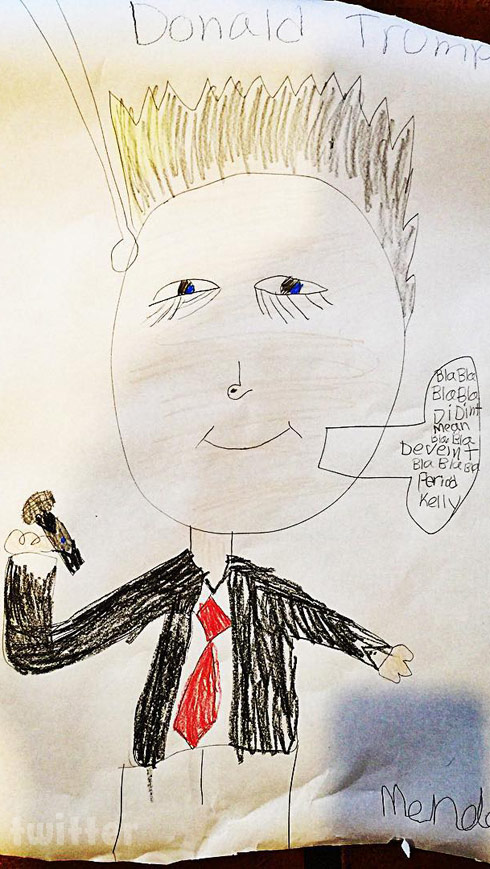 In case you are not as hip to current affairs as Mendez, Donald Trump’s most recent headline-grabbing idiocy was criticizing Fox News host and primetime debate anchor Megyn Kelly by claiming she had “blood coming out of her wherever.”

Donald Trump was later disinvited from speaking at Erick Erickson’s RedState Gathering in Atlanta on Saturday. “As much as I do personally like Donald Trump,” Erickson wrote in his disinvitation announcement, “his comment about Megyn Kelly on CNN is a bridge too far for me.”

Instead, Trump took to the airways to try and explain his point of view. On CNN’s State of the Union With Jake Tapper, he continued his attempts at smooth talking his way out of trouble over the Megyn Kelly comments.

“She was very angry because I bested her with a question that was a very unfair question,” Trump said of Kelly. “So she was very angry, and when I was speaking about it on a CNN show, by the way, which was interesting, but I was speaking about her–I said blood was pouring from her eyes or out of her eyes, which is a very common statement, and by the way, I said the same thing about Chris Wallace.”

I said—no, blood was pouring from wherever. I wanted to finish the sentence. I wanted to get off of the whole thing and get back on to the subject of jobs or whatever we were talking to about right after that. So, I didn’t even say anything because I didn’t even finish the thought. I was going to say, nose, and/or ears. Because that’s a very common statement. Blood flowing out of somebody’s nose. It’s a statement showing–and remember she had great anger when she was questioning me, especially since I mentioned something, that was the Rosie O’Donnell statement which everybody said was by far the loudest applause of the entire day of all of the speakers. I think you would agree. She became very angry. All I was doing was referring to her anger. I said nothing wrong whatsoever.

“Only a deviant would say that what I said was what they were referring to,” Trump concluded. “Because nobody can make that. You almost have to be sick to sort of put that together.”

Jake Tapper pressed Trump. “You’re saying that you did not mean to suggest that Megyn Kelly was having her period?”

The Don was offended:

Of course I didn’t! Who would say that? I went to the Wharton school of Finance, I was an excellent student, I’m a smart person. I built a tremendous company. I had a show called The Apprentice that NBC desperately wanted me to do another season. I do all this stuff. Do you think I make a stupid statement like that? Who would make a statement like that? Only a sick person would even think about it.

Nice try, Donald. I think Mendez and the rest of the country know what you are full of.

And in case you were wondering, this doesn’t appear to be the first foray into fine art by Dr. Jenn’s daughter Mendez. Check out this drawing of Dr. Jenn and her boyfriend Eric Schiffer that I assume Mendez is responsible for–although I suppose it could have been her twin sister Quincy:

My daughter drew this picture of me, @ericschiffer and our animals today.

Who is Tiffany Trump? Donald’s 21-year-old daughter steps into the spotlight