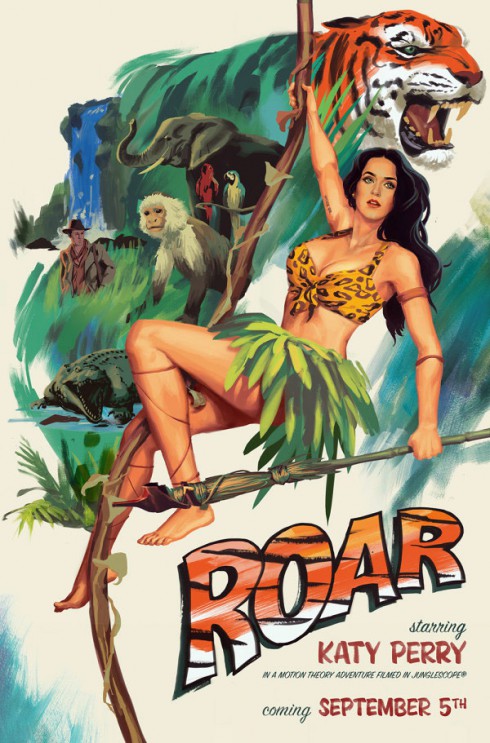 The now-indisputable modern day Queen of Pop Katy Perry continues her teasing and fun marketing campaign for the new single “Roar” off her upcoming album Prism by following her boxing-themed performance of the song from under the Brooklyn Bridge during the MTV Video Music Awards with a brief preview video and the above retro Tarzantastic poster featuring the no-need-to-exaggeratingly voluptuous Katy swinging through a jungle on a vine wearing a leopard-print top and a skirt made of jungle foliage.

Katy posted the photo on Twitter yesterday along with the words, “THE #ROAR MUSIC VIDEO IS COMING TO YOU IN JUNGLESCOPE SEPT 5TH!” The poster iterates Katy’s announcement and reads, “ROAR starring KATY PERRY in a motion picture adventure filmed in Junglescope® coming SEPTEMBER 5th”

And in case you missed, earlier in the week Katy released a preview clip from the “Roar” video in which she can be seen basically exactly as she is in the poster above, only in live action:

Now THAT’S what I call a vine video! 😉

I’m so glad Katy Perry is back — she really does brighten the entire landscape of celebridom.

Become a polygamist via the Sister Wives Facebook app