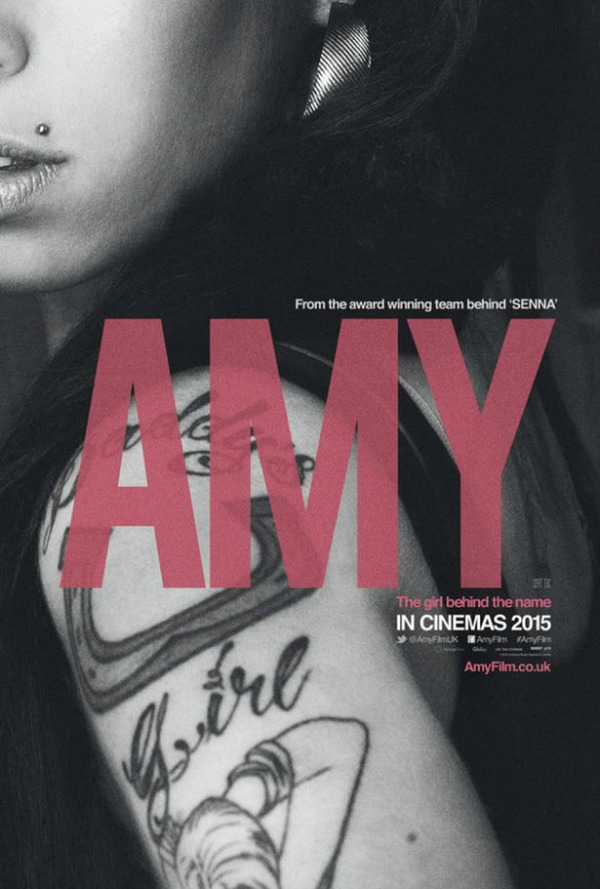 It was announced in April, 2013 that filmmaker Asif Kapadia, who directed the critically acclaimed documentary Senna (that you REALLY must see!), was developing a documentary on singer Amy Winehouse, and yesterday the production company released the first movie poster and the UK release date!

As you can probably tell from the movie poster above, the film is titled AMY: The Girl Behind the Name and it will be released in theaters in the UK on July 3. That is 20 days before the fourth anniversary of her death from alcohol poisoning on July 23, 2011. (There has been no announcement yet on a US premiere date.)

At the time the film was first announced, the Winehouse family issued the following statement:

The Winehouse family have been approached with many proposals for a documentary about Amy’s life and work. We treated the subject with great care, with a desire to tell her story right. The award winning producers of Senna presented a vision that would look at Amy’s story sensitively, honestly, without sensationalising her. We want this to be a tribute to her musical legacy.

Director Kapadia and producer James Gay-Rees (Exit Through The Gift Shop) had this to say at the inception of the project:

This is an incredibly modern, emotional and relevant film that has the power to capture the zeitgeist and shine a light on the world we live in, in a way that very few films can. Amy was a once-in-a-generation talent who captured everyone’s attention; she wrote and sung from the heart and everyone fell under her spell. But tragically Amy seemed to fall apart under the relentless media attention, her troubled relationships, her global success and precarious lifestyle. As a society we celebrated her huge success but then we were quick to judge her failings when it suited us.

A “close-to-complete” movie trailer for Amy was previewed at Universal Music Group’s pre-Grammy brunch back in early February, but the finished trailer has yet to be released. Universal Music UK CEO/chairman David Joseph talked about the project at the brunch:

About two years ago we decided to make a movie about her — her career and her life. It’s a very complicated and tender movie. It tackles lots of things about family and media, fame, addiction, but most importantly, it captures the very heart of what she was about, which is an amazing person and a true musical genius.

The movie has a Facebook page, and if you scroll through the timeline you will see that the filmmakers have been EXTREMELY diligent in compiling every bit of information they can, ranging from interviews and concert footage, to rare photos and Amy Winehouse recordings and writings. Check out this photo of production’s working Amy Winehouse timeline posted on the page way back in August of 2013:

I don’t know about you, but I cannot wait to see this! Not only am I a HUGE Amy Winehouse fan, but Senna was one of the best (and most surprising) documentaries I’ve ever seen. Through masterful editing and compelling story telling, Kapadia put together a documentary about a Formula One race car driver that anyone (even someone like me, who knows nothing about Formula One racing) would be moved by. Imagining Amy Winehouse’s life story getting the same treatment sends chills up my spine.

And speaking of chills up my spine…