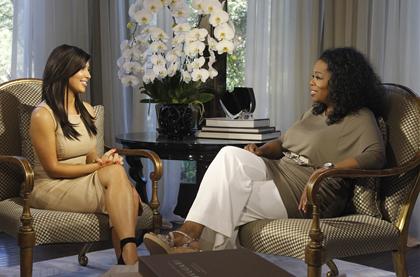 In the second part of her interview with Oprah that Oprah herself described as “perfect,” Kim Kardashian talked about her relationship with Kanye West, and how she feels about fame and her image.

First, when Oprah asked about the that she’s aware that the whole reason she’s famous is because of it: “I’m not naive to the fact that that was pretty much is how I was introduced to the world.” (Score one for some honest self-awareness.)

Although Oprah appears to think Kim Kardashian is the most amazing person she’s ever interviewed, for me even this big-time, candid interview with Oprah fell flat. Often when you watch the Kardashians talk, it’s like there’s no there there, especially Kim. Khloe seems the most real, with Kourtney behind her, and then Kim seems as if she’s completely made up of fluff and fairytales. Maybe she is.

Speaking of fairytales, when Oprah asked Kim if Kanye West was her fairytale, Kim responded:

I’ve known him for a really long time. We’ve been friends for like six and seven years, so it’s very comforting to have someone that knows everything about you, that respects, understands, has gone through similar things. I can really relate to his mother passing, he can really relate to my father passing, there are so many similarites in our life that I feel like we’re in a really happy, good space.

On why it took so long to get together:

I think I need to go through all my experiences. We’ve always had an attraction to each other, but we’ve always been in other relationships, or it wasn’t the right timing, and one day, I don’t know, it just happened. And it took me by surprise even.

On if it’s just a publicity stunt:

No. It’s your heart, you’re playing with. I couldn’t sacrifice my heart for a publicity stunt.

She also says that she’s not moving in with Kanye, but she did sell her house so she could move into a more private one. She also confirms that she bought Kanye a Lamborghini, and surprised him with it using a flip phone while he was on tour in Ireland.

When asked about her image, Kim went deep on us. She said that although the sex tape and parties and being rich is part of who she is, it’s not ALL of it. She says she goes to church a lot, and rarely drinks, and all that negative stuff is in her past. She feels like Kanye’s the same way, he’s more than his bad boy image. “It’s not even half of who he is.”

Then Oprah asks a question phrased in a way that one could only surmise that her goal was to make her audience want to take bath salts and rip their skin off:

O: “If it were to all go away in the next year or so, would it be well in your soul?”

Kim went on to say that a year ago, she probably would have said it would freak her out, but now she’d be okay just being herself. She noted that she once felt she WAS her brand, but now she realized that the brand is about her fans, and she can separate herself from that. At least that shows some growth.

“Now, what makes me happy in life doesn’t have to do with all the way me.”

O: “That was perfect, you were perfect. You were so on point.”

CLICK HERE to read the highlights of part one of her Oprah interview.