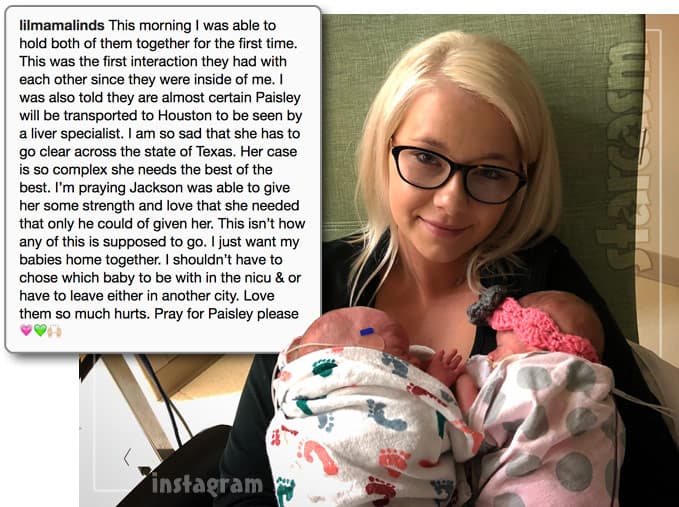 Former 16 and Pregnant star Lindsey Nicholson continues to update fans on the health of her premature twins Jackson and Paisley, both of which have spent time in the NICU with serious medical issues since their birth on October 25.

The last time we checked in with Lindsey, Jackson seemed to be doing well and was out of the NICU. Paisley, however, continued to have serious issues, and doctors scrambled to try to determine the cause. The main concern was her liver, as blood tests indicated it wasn’t functioning properly. In fact, Paisley’s case is such a rarity that doctors had to give her an antibiotic never before prescribed for babies, and her issues are being documented for to other doctors worldwide.

Our previous update was on November 16. I will let Lindsey take it from here, starting with her entry on November 20:

NOVEMBER 20
I woke up today in a really weird/anxious/scared/almost angry mood because in an hour our sweet girl has to be put under deep sedation so she can get a special MRI of her liver. All I want to do is hold her hand during it, but I can’t even go with her to the room to get it? In order to get the image doctors need the anesthesiologist has to manually hold Paisleys breath for her. They think she has biliary atresia. If you don’t know what that is, it’s an extremely serious health condition that could ruin her liver. Praying she really doesn’t have it and that her portals are just covered from her liver and gall bladder being inflamed from her infection she had. We meet with all of Paisleys care providers tomorrow morning. GI Doctors, surgeons, blood doctors etc.. to go over the results. If she does have it they only have about 2 weeks to try to surgically fix the biliary atresia before it becomes to late. Besides Paisley dealing with this she’s doing so much better. I got to give her her first bath yesterday & she loved it ???? #myminime? 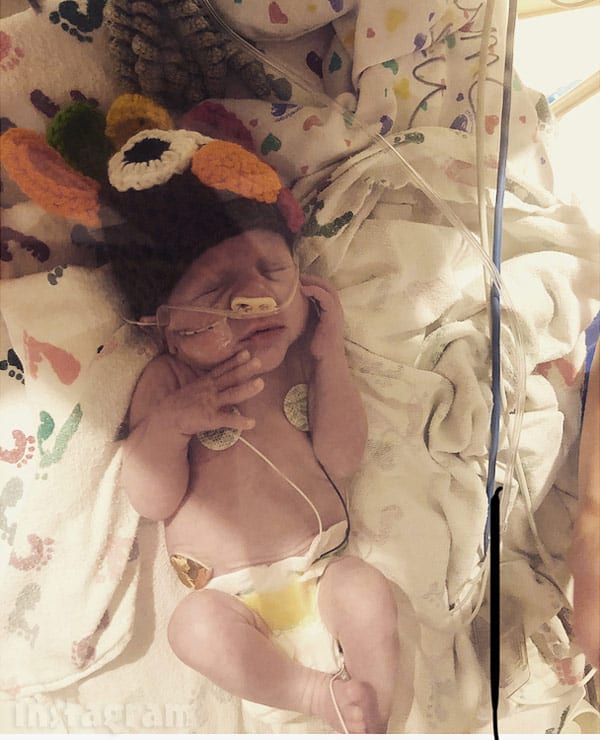 NOVEMBER 24 (With photo above)
Happy thanksgiving from my family to yours. Aniyah got to see Jackson from the window yesterday ? celebrating the holidays is really hard this year. I would do anything to have all my babies home. Can’t wait for next years holiday season?? I’ll post an update on Paisley once we get her liver biopsy results back.

NOVEMBER 27
Jackson’s almost ready to graduate from his incubator and move onto a bassinet. They are testing his temperature out in clothes to make sure he can fully handle being in his big boy bed? #littlechunk #bigmilestone #nicubaby #29weeker #nicumama

NOVEMBER 28
Paisley saw Jackson get into his big boy clothes so of course she wanted to twin with him ? little girl is almost ready to go into her bassinet as well. We are still waiting on her liver biopsy report. They ended up having to send it off to the children’s hospital in Houston for a second opinion. #caughtupovernight #alwayssmiling

NOVEMBER 29 (With photo of Jackson out of his incubator)
So this just happened? This is an extremely huge accomplishment for Jackson. So proud of him. Seriously crying, I felt like I would never see this day. To not have to put my hands in an incubator to touch him anymore. To be able to pick up my baby by myself without having a nurse do it because there was so many cords/wires. This is such a happy day y’all! The last thing he needs to do in order to be able to come home is taking his full feeds from breast/bottle, without having to use a feeding tube. Right now he’s only taking about 35% of his feeds without using the feeding tube. #proudmama #bigboy #nicubaby #29weeks #34weeksgestation 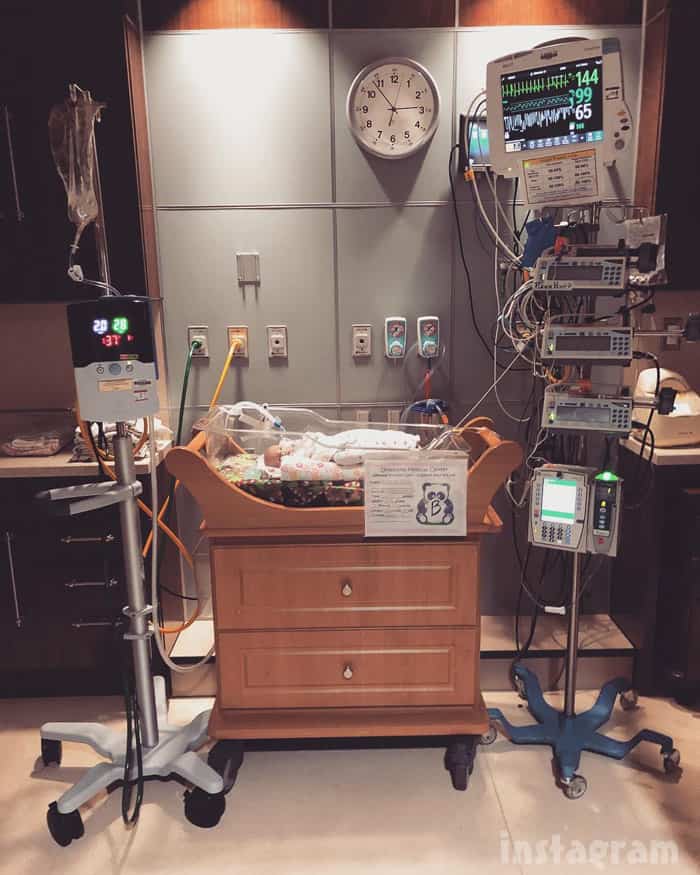 DECEMBER 1 (With photo above)
Sweet Paisley did it y’all ?? she made it to a big girl bed. So proud of her! Our sweet girl finally started gaining weight again, got into a big girl bed, went down on the hiflow, & gets to start breastfeeding tomorrow! They got her liver biopsy back today & they also got her Doppler results. All Paisleys care providers are meeting next week to go over everything together. They said Paisley has very complicated intestinal issues that are going to take some time to figure out what exactly they are and what the treatment plans will be. Until then we will be praying and staying as positive as we can be for her? #tinybutmighty #marchofdimes #strongestbabyever #myheart

DECEMBER 4 (with photo at the top of this post)
This morning I was able to hold both of them together for the first time. This was the first interaction they had with each other since they were inside of me. I was also told they are almost certain Paisley will be transported to Houston to be seen by a liver specialist. I am so sad that she has to go clear across the state of Texas. Her case is so complex she needs the best of the best. I’m praying Jackson was able to give her some strength and love that she needed that only he could of given her. This isn’t how any of this is supposed to go. I just want my babies home together. I shouldn’t have to chose which baby to be with in the nicu & or have to leave either in another city. Love them so much hurts. Pray for Paisley please ????

If you want to keep up with Jackson and Paisley’s journey, be sure to follow Lindsey on Twitter and Instagram. Positive comments and well wishes are welcome! (If you’re heading over there to offer up negativity, you should probably take a moment to examine your life.)