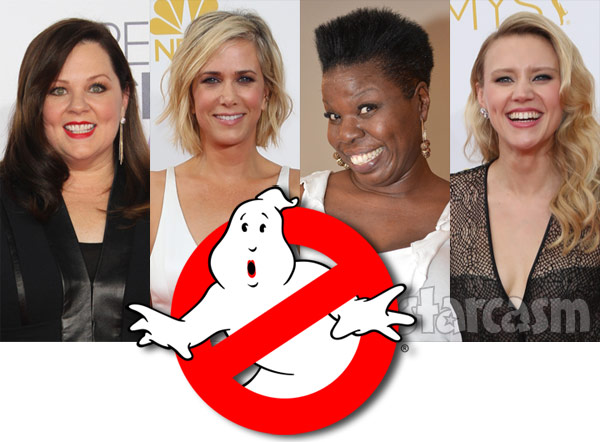 After what seems like ecto-eons of speculation and fan fantasizing, the cast of the all-female Ghostbusters movie reboot has finally been announced! Director Paul Feig will be reuniting with Bridesmaids co-stars Melissa McCarthy and Kristen Wiig, who will be joined by current Saturday Night Live cast members Leslie Jones and Kate McKinnon.

Feig slimed the internet earlier today by posting the following photo on Twitter with no caption:

The director’s tweet backed up a report from The Hollywood Reporter a couple of hours prior that revealed Melissa McCarthy had already signed on and that Wiig, Jones and McKinnon were in talks with the studio. From THR:

Negotiations are ongoing, but the quartet are expected to sign on as the specter-seeking, poltergeist-punishing, phantom-phollowing foursome in the reboot, which is eyeing a summer shoot in New York.

So what do you think of the cast? Personally, I would have liked to see McCarthy and Wiig paired up with Broad City‘s Abbi Jacobson and Ilana Glazer, but I realize that dream is a little unrealistic. (Even so, if negotiations fall through… Just sayin’!)

Although it’s unclear what the plot will be for the reboot, I think I have found the ladies’ updated ghosbusting vehicle, Ecto-2:

Melissa McCarthy is unrecognizable on ‘The Heat’ movie poster