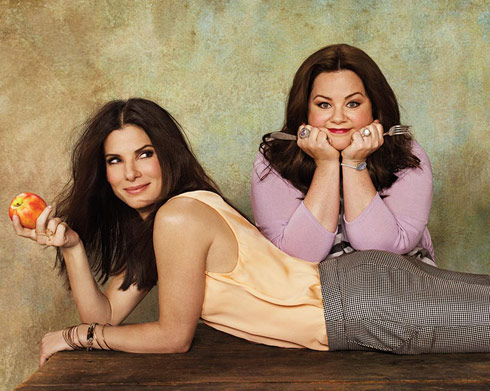 Sandra Bullock and Melissa McCarthy teamed up for a recent interview to promote their upcoming buddy-cop movie The Heat. Parade released part of the piece to appear Sunday and the two stars revealed some interesting tidbits like the genuine friendship they developed while working together and how they both suffer from working mom guilt.

The director of the film, Paul Feig (Bridesmaids), noted how the two’s friendship blossomed after filming. Bullock and her 3-year-old son, Louis, frequently spend quality time with McCarthy, her husband Ben Falcone, and their daughters, Vivian, and Georgette.

Sandra: “I’ve always wanted to do a female buddy film, the kind the guys get to do. This didn’t have anything to do with getting a guy, and it didn’t involve shoe shopping…I’d seen Bridesmaids, and I said, ‘If Melissa McCarthy wants to work with me…’ The first week I was like, ‘What is she doing? That’s not in the script.’ I was the lone actor, jack-of-one-trade, in a room full of improv actors and stand-up comedians. I mean, you should just listen to the stuff that comes out of her mouth.”

Melissa (to Sandra): “Before I knew you—don’t listen, I don’t want you to get cocky—I was asked in an interview who I thought was funny, and I said you…I love to watch someone who just goes for it and isn’t worried about whether it’s silly or awkward or unflattering.”

On whether they worry about being good or bad moms:
Sandra: “Every single second of every single day…I don’t know if I feel like a bad mom, but at the end of the day I’m always plagued with, did I do enough? Should I go in a different direction? But I also know that my entire life revolves around Louis.”
Melissa: “It plagues me. I feel intensely guilty for working…You have to be able to provide for your kids. But I feel like it’s a weird modern phenomenon that you always feel guilty for it.”

The two were also asked about the price of fame in regards to the paparazzi in Los Angeles and folks taking pictures of their kids. Sandra felt that as an adult she was fair game even though she’d just as soon not be photographed leaving school in her sweatpants but that she instinctively covers Louis’ face because her son doesn’t care for it and gives photogs the “stink-eye.”

Melissa takes a harder line as she added, “Strangers shouldn’t be allowed to take a picture of your child and sell it for profit. They think, ‘We’re putting out a product,’ but you’re putting out a child.”

The Heat is set for a June 28 release date. Here’s a trailer for the film featuring new bffs Sandra and Melissa:

Who you gonna call? First trailer for Ghostbusters reboot released!