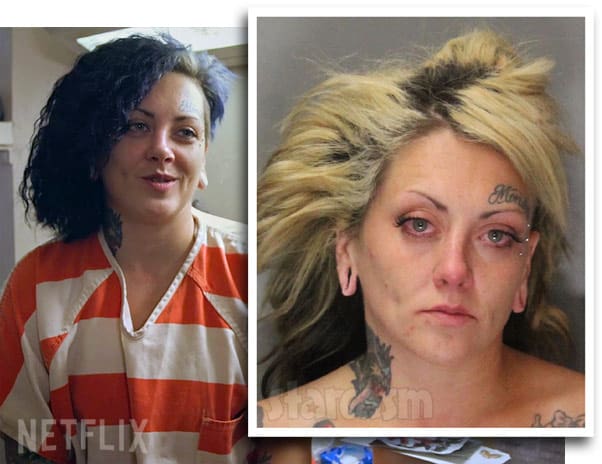 The Elk Grove Police Department shared details about the arrest, which spiraled to include multiple additional charges. According to their statement, an employee at a bank located in the 9100 block of Bruceville Road in Elk Grove called to report a “suspicious circumstance” on Friday. The caller stated that there was a woman trying to open an account with an identification card that was not in her name.

“The bank became suspicious and called us after a witness recognized the female as Megan ‘Monster’ Hawkins from the Netflix show Jailbirds,” the statement reveals. Megan would be quite easy to recognized given her forked tongue and “Monster” tattoo just above her left eyebrow.

By the time officers arrived on the scene, Megan had left the bank. Unfortunately for her, police did eventually locate her, as well as the vehicle she drove to the bank — which had been reported stolen.

“A search of the reported stolen vehicle led to the discovery of several credit cards in different people’s names. A search of Hawkins`s property led to the discovery of a controlled substance,” the Elk Grove P.D. statement continues. “Hawkins was arrested for various charges including possession of a stolen vehicle, unlawful use of personal identifying information, and violation of probation. Hawkins was transported to the main jail.”

The arrest happened just one week after Megan sat down with Yasmeen Hassan from CBS Sacramento to talk about Jailbirds. “I can’t thank them enough for, like, wanting to talk to me, because it’s helped change my life,” Megan reveals in the interview. “I want so badly to be happy again, and I feel like it’s so far away.”

Megan was released earlier this month and placed on probation after pleading no contest to vehicle theft.

The 29-year-old faces five felony charges from Friday’s arrest, including identity theft, theft or unlawful driving of a vehicle, receipt or purchase of a stolen vehicle, forging or altering checks, and probation violation. She also faces a misdemeanor charge of possession of a controlled substance. Her bail has been set at $10,000, and her next court appearance is scheduled for Tuesday, May 21.