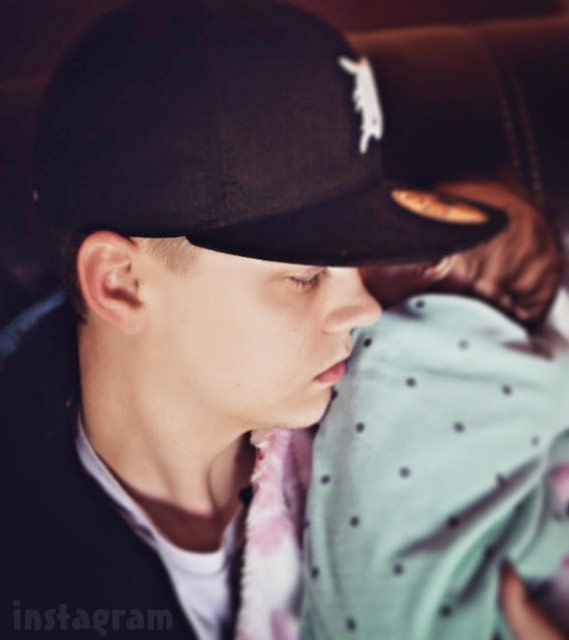 It’s been almost an entire month since Teen Mom stars Tyler Baltierra and Catelynn Lowell welcomed their daughter Novalee Reign on January 1, and in addition to enjoying parenthood, the couple has seemingly enjoyed teasing fans with only partial photos of their little bundle of joy. Proud pops Tyler continued the trend moments ago when he shared the photo above on instagram in which he can be seen holding Nova with only her ear and the back of her head visible. Never one to shy away from sharing his emotions, Tyler of course added this heart-warming caption in appreciation of the women in his life:

I could hold her in my arms all day. My girls are the best thing that has ever happened to me. The love I have for them is overwhelming, inspiring, and a true blessing to my life! #NovaleeReign #Carly #Catelynn

On Tuesday Tyler posted this photo of Nova’s tiny hand holding his finger with another message affirming his commitment to being a dad:

I promise to always hold your hand through this life. I promise to never let go. I promise to love and guide you until the end of time. I love her little hands…she's just perfect #NovaleeReign #MyTootie

Novalee had a newborn photo shoot when she was only five days old, but all we’ve seen so far is this preview shot which is actually a photograph of a digital camera preview screen: 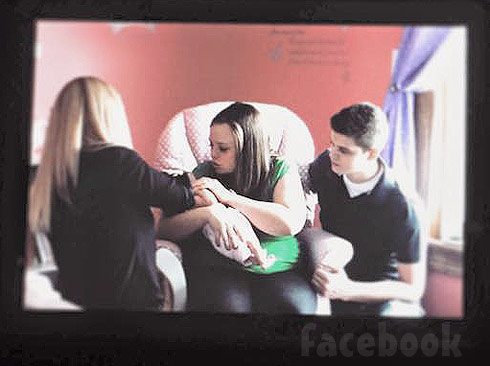 And here’s the photo that pretty much broke the internet featuring “Momma Bear” Catelynn holding her newborn daughter:

Momma Bear holding our little angel! Can't tell you the feeling of witnessing this. Look at my beautiful bride to be! That woman is beyond strong, caring, and selfless. Couldn't have asked for a better little family #Blessed #NewYearBaby #MyGirls #AreMyWorld

The moment must have been extraordinarily bittersweet for both Catelynn and Tyler, who were both emotionally devastated when they made the difficult and selfless decision to place their first daughter Carly with adopted parents Brandon and Teresa — MORE THAN FIVE-AND-A-HALF YEARS AGO! (Was it really that long?) But the couple is in a much better place now and fully prepared to take on parenting duties, which we will get to see soon when the original Teen Mom returns to MTV.

Speaking of Catelynn and Tyler placing Carly with adopted parents and now being in a better place, the couple’s adoption counselor, and life mentor it seems, Dawn Baker also got in on the partial Nova photo sharing with this picture on Twitter:

And Dawn will round out our complete Catelynn and Nova post-birth photo collection post with this black-and-white shot of Dawn with Momma Bear posted on Monday:

Now we can all get back to waiting for that first photo where we really get a good look at little Nova. Perhaps it will be in a magazine photo spread the same week as the Teen Mom Season 5 premiere? Or maybe it will happen in conjunction with the release of Catelynn and Tyler’s book Conquering Chaos, to be released March 3? (Available for preorder now from Amazon for a mere $14.35!) ***SIGH*** Back to the waiting game… 😉