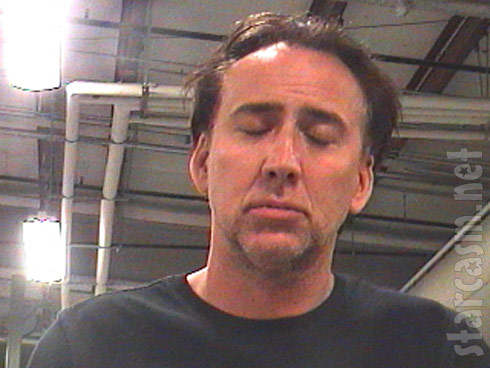 Actor Nicolas Cage was arrested in New Orleans early this morning after a drunken altercation with his wife Alice. A cab driver called police after seeing the couple screaming and yelling at each other. He also told authorities that he witnessed Nicolas push Alice.

When police arrived they reportedly advised Nic and Alice to calm down and return home. At that point Nicolas Cage allegedly dared the cops to arrest him by stating, “Why don’t you just arrest me?” Police iterated their suggestion and Nicolas repeated his challenge. This time the cops answered his challenge and placed him under arrest, charging him with domestic abuse and disturbing the peace.

Above is Nicolas Cage’s mug shot after his arrest, which took place at 6:33 this morning.

TMZ reports that his wife does not want to press charges and claims there was no physical contact.

According to online records, Nicolas Cage is being held on $10,000 bond for “DOMESTIC ABUSE BATTERY” and $1,000 for the “DISTURBING THE PEACE” charge.

Dog (a.k.a Duanne Chapman) had this to say about his client:

“I am a truly dedicated fan of Mr. Cage and will not be granting any interviews about my client as I wish to respect his privacy. I performed my duties as a bail bondsman and not in connection with our show. This is what I do for a living. There are two sides of my job: I release my clients after they have been arrested; and pick them up if they don’t show up in court. I do not believe the latter will be the case for Mr. Cage.”