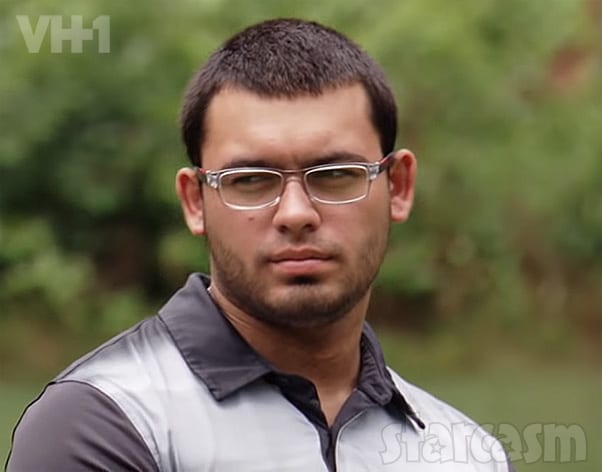 The son of Mob Wives star Renee Graziano is currently facing multiple felonies after he allegedly falsified documents and received unemployment benefits while working in 2018.

According to court records, Anthony “AJ” Pagan was arrested on August 5 and charged with multiple felony counts. The criminal complaint accuses AJ of “utilizing the computer systems of the New York State Department of Labor to create false entries… in that defendant did fraudulently assert that defendant was totally unemployed and entitled to said benefits, when in fact the defendant was employed.”

The money AJ allegedly received for unemployment was between February and April of 2018 and totaled more than $3,000. Investigators allege that the funds were deposited into an account that was accessed with a debit card that was sent to AJ’s address.

Here are the charges filed against AJ:

AJ was released on his own recognizance on August 23. His next scheduled court date is November 23. “I am vigorously defending Anthony’s case,” AJ’s attorney Dawn Florio told Staten Island Live. “It is a pending case so I will not be commenting further.”

This isn’t AJ’s first run-in with the law. He was arrested in 2012 after getting into an altercation in Staten Island. However, AJ insisted that he was simply trying to break up a fight.

UPDATE – Renee commented on our Instagram post and said AJ pleaded down and has paid his debt. “MY SON WAS NOT CHARGED WITH A BUNCH A FELONYS AND ITS BEEN PLEADED DOWN,” Renee wrote. “He was 20 n made a mistake it’s 2500 owed n it’s paid.”

Our story was based on reporting by Staten Island Live and the New York State Unified Court System website. Here is a current screen shot from the NYSUCS website listing the charges against Anthony: 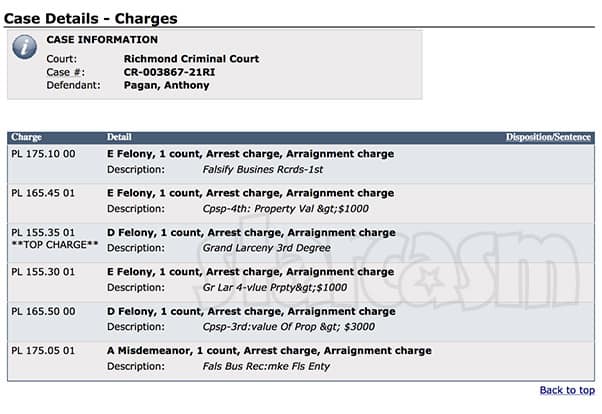 Renee also insisted that she doesn’t work at Stoner Pizza (in response to the information below). “I don’t work I hag [sic] w my brother @pizzapusha,” she commented. That is a change from August 23 when Renee posted a photo at Stone Pizza and announced: “IM BACK‼ #Stoned 💨”

“What are you doing over there?” one of Renee’s followers asked. “I work here,” Renee replied. “It’s amazing COME 🔥.”

If you’re curious what Renee Graziano is up to these days, the answer is pushing pies — pizza pies. Renee is working for “The Pizza Pusha” Chris Barrett’s infamous Stoned Gourmet Pizza, which sells pizzas drizzled with THC-infused olive oil. It’s unclear exactly what her job is at Stoned, but I assume she is a celebrity hostess of sorts?

In addition to working, Renee also has herself a new man. Renee’s beau goes by @rodollahrecords on Instagram, but I believe his name is Sean Rowe. As you can probably tell from his IG handle, Sean is in the music business. In addition to owning Rodollah Records, Sean is also a musician himself. Here’s a link to his 2002 CD Love & Lust, which looks to be out of print and collectable.

Here’s a photo of Renee and her man posted earlier today:

On August 28, Renee shared a post and seemed to reveal in the comments that her boyfriend might actually be her fiance! Here’s Reneee’s caption followed by her interaction with her potential future hubby:

RENEE: I Think The Statement “Absences Makes The ❤ Grow Fonder” Is True For Both Of Us 🐻 Im Grateful We Have Eachother And That Our Communication Skills Are As Strong As Our Love ❤ #RightWhereIWannaBe #BearAndHisBeauty

RENEE: @rodollahrecords only you know just I’m saying WHY U ASKED ME TO MARRY ME .. THEY DONT KNOW I SAID YES.

Never one to go very long without stirring up a little controversy, Renee created some buzz this summer after a photo of her surfaced with what appears to be a couple lines of a white powdery substance in the background. Here’s the photo:

In the picture, Renee can be seen posing with Simone Tisci in the foreground. The white powdery substance can clearly be seen in two separate lines on the counter behind the women on the left.

As fans of Renee are well aware, she has struggled greatly with addiction and sobriety. The 52-year-old reality star posted about the ongoing struggle earlier this week. Here’s the image followed by Renee’s comment:

In Order For Me To Find My True Happiness And Inner Peace I MUST Deal With The Loss Of My Dads Death, My Traumatic Past, And My PTSD

All While Remaining COMPLETELY Sober Through The Pain And Healing Process 💯 Might Be The Hardest Thing I Will Have To Do BUT IM FAR FROM A QUITTER .. Ya Know They Say Griefs Hits About 2 Years Later Well It Hit Me Like A Ton Of Bricks About A Month Ago, I Was Walking Around Pretending Everything Was OK Lying To Myself ‼Thats The Type Of Shit That Will Cause Someone To Snap, Lashout And Or God Forbid Replase, In The Past Numbing My Pain Was My Answer Which Just Delayed The Process Of Healing .. Living Clean And Sober Isn’t Easy Not At All But Im Doing It Cause Its The Only Way I Will Live Long Enough To Watch My Grandbabies Grow Up Or My Son Walk My Granddaughter Down The Isle Let Alone Grow Old With 🐻 My SPIRIT Refuses To Be Disturbed Especially After Working So Hard This Past Year!!! Going Forward I Will Only Speak To People Who Are For Me And Moving In The Same Direction As Me 🆙️ Its Time To Grow Even More Leave The Rest Of The Trauma From My Past Behind Me And Accept My Dad Is Never Coming Back 😢 I Have To ITS THE TRUTH However My Closest Of Friends Remind Me He Will ALWAYS Be With Me In Spirit 🙏

I Want To Enjoy The Sun Like I Am In This Photo I Want To Laugh And ❤ The People Who Love Me .. It Wasnt Until Last Night That Someone Told Me “NO Amount Of Money, Man Or Woman Is Worth Your Peace!!!” 🙏 THAT HIT HOME!! So I Have To Learn Some New Coping Skills Because The Old Ones Arent Working,, Whoever Hurt Me Or Whatever Happened To Me From Childhood Till My Dads Passing Has ME Blocking My Own Blessings 🙌

So Who I Was Last Year, Last Week Or Even Yesterday Is Not Who I Am Today .. Ive Come Along Way In This Last Year,, And I FAR FROM DONE BEING GREAT!! So To Have The Opportunity To Get Away Relax And Reflex Without The Everyday Noise And Spend Time With 🐻 Who’s Loves RENEE For RENEE 😜 Is PRICELESS .. Thank You To My Father From Heaven And Father Up In Heaven