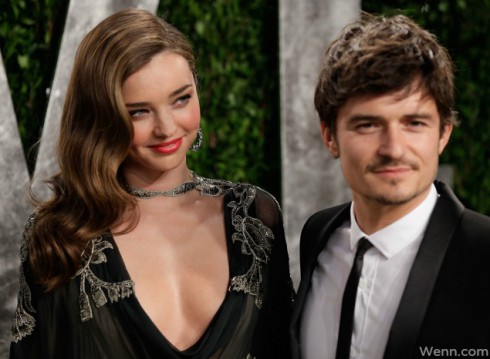 Miranda Kerr may dominate as one of the top models in the world. But, when it comes to her marriage, she is more content with taking a backseat.

“What really works for me when I come home, is to relax more into the feminine side,” she said in an interview with Net-a-Porter.

Miranda, who has been married to Orlando Bloom since 2010, claimed her marriage is better because she is willing to hold back.

“If you’re really an alpha female, you don’t allow [your partner] to have the space to feel like the man in the relationship. Maybe I am too traditional, but men feel important when you ask for their help, instead of thinking you can do it all on your own.”

Although Miranda refrained from using the buzzword “submissive,” other celebrity wives have explored the controversial territory. This spring, professional volleyball player Gabrielle Reece authored My Foot is Too Big For the Glass Slipper, a marriage advice book.

“To truly be feminine means being soft, receptive, and — look out, here it comes — submissive,” she wrote.

After being praised by some and chastised by many more, Gabrielle, who has been married to Laird Hamilton for 17 years, clarified her point in a New York Times editorial.

“In discussing what works for me in my home life, I used the word submissive. I did not say, ‘Don’t go out in the world and be a woman who puts herself in a position in which she can thrive and be personally and professionally respected.’ When I used the s-word, I was talking about the way many couples divide labors and roles irrespective of gender, and I was talking about what’s been true for me in my own relationship.”