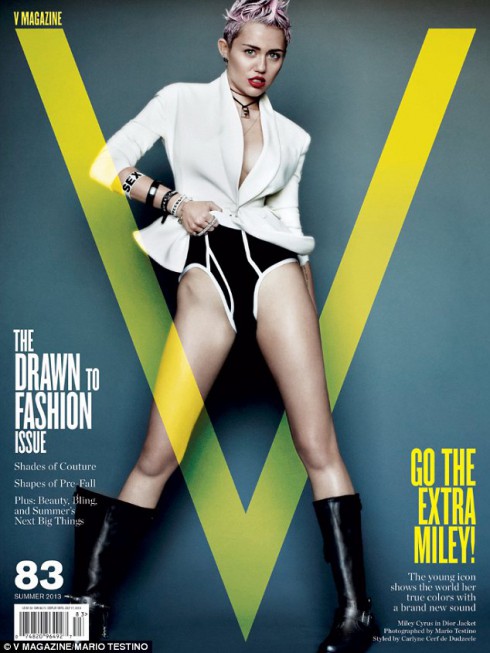 Miley Cyrus covers the latest issue of V Magazine in some of her most provocative photos ever (click here to see them all.) In the interview conducted by Pharrell Williams, who produced her latest album, Miley mostly talks about her album, but also about “boyfriend” Liam Hemsworth.

“I’m not home with my boyfriend all the time. We work. Every week it’s “Are they broken up? Because we don’t see a photo of them.” I don’t have time to go to Starbucks with my boyfriend every morning. I wish I did, but I don’t.

I’d rather chill at my house and be there for the time I actually get to spend with him. And then I’m at the studio all day. He gets up to work out at six and I come home at five from the studio.”

Don’t want to make too much of this, but it’s interesting that she didn’t use the word “fiance.” She IS still wearing her engagement ring, telling ELLE UK “it felt right” to wear the ring. “We have a house together and dogs. It just seems right to be wearing this ring and to be committed,” she went on. “But we keep our relationship low-key and don’t talk about it any more.”

There’s often too much pressure put on engagements and weddings, so it’s probably good that they’re just keeping their relationship the way it is if it’s working. 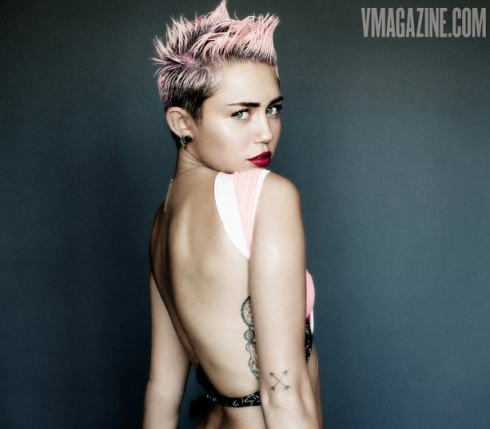 As for how different her new album will be, it’s clear the 20-year-old is putting a lot of effort into cutting ties to her Hannah Montana Disney image.

“I got excited because on this record I can say whatever I want. And then I got more comfortable with that and the record got better and better. If I had made it two years ago when I should have had a record come out, it would have been a little brat trying to say “This isn’t who I am! This is what I’m trying to prove!” Now I’m not trying to prove anything to anybody.”

Here’s a video for the shoot:

Are you excited about Miley’s new album? Will you listen to it?