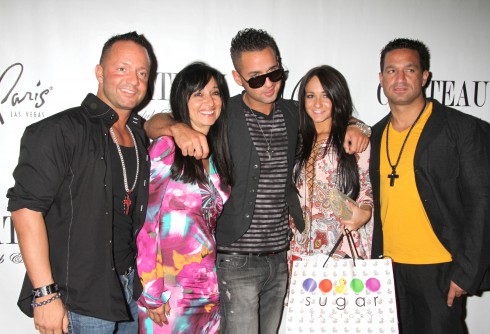 Mike “The Situation” Sorrentino is following in the steps of his former Jersey Shore co-stars Snooki, JWoww, and Pauly D, and stepping in front of the cameras for a new spin-off reality show. According to a new report, the show will follow Mike and his family as they live it up in New Jersey.

TMZ says that Mike, who also appeared on Celebrity Big Brother, recently began filming his new show with his brothers and a few other members of the Sorrentino family, which fans of Jersey Shore have met in the past. As of now, it’s unclear if anyone is backing the project.

Here’s clip of Mike filming the series, which will apparently also co-star The Situation’s rather vast collection of expensive sports cars:

Back in 2011, it was reported that Mike signed a “series development deal” with MTV and would be shooting a pilot later that year. At the time, Mike said, “I’m excited to continue my relationship with MTV … Hopefully, there will be plenty more situations in the future.” (MTV was behind both Snooki & JWoww and The Pauly D Project.)

Then, in late 2011, Mike’s addiction issues began spiraling out of control and in early 2012, he entered rehab, and his spin-off never came to air.

I was a fan of The Sitch on the first couple season of Jersey Shore, but only in the context of that cast. Personally I just can’t imagine him carrying his own show. What do you think? Will you be tuning in to Mike’s new series — if it airs?

VIDEOS ‘The Situation’s’ dad ‘The Confrontation’ brutally calls out son