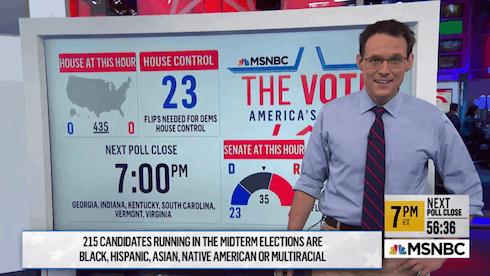 VOX – The 2018 midterm elections were yesterday, and kind of a lot happened! Here’s a rundown of the results — including a look at some of the likeliest possible investigations into Donald Trump

JEZEBEL – As far as election night coverage goes, the glory of Steve Kornacki’s giddiness and Midwestern accent would not be denied. (I know he’s from Boston, but give his coverage a listen)

CELEBITCHY – It’s taken way longer than it should have, but People Magazine finally named Idris Elba the Sexiest Man Alive. Early rumors suggest that they’re going to do it again next year, to make it up to Idris for stringing him along since approximately 2011

LAINEY GOSSIP – People‘s choice means, of course, that early 2018 favorite Michael B. Jordan is *not* the Sexiest Man Alive for 2018. In case you thought he was robbed, here’s a photo gallery of Michael looking every inch a Sexy Man for your viewing pleasure

REALITY TEA – Speaking of Real Housewives, RHOD star Cary Deuber says the cast members are “fighting for the sake of fighting” and blamed at least some part of that on their “alcohol-fueled” ways. And thus does reality TV go on

DLISTED – Burger King is shading Kanye on Twitter for some dumb-yet-understandable tweets of his and while the whole thing is petty as can be, BK’s social media people also throw some good shade

THE BLEMISH – I would have sworn that the last Deadpool movie just came out a few months ago, and I was right: Fox is “squeezing the last few cents out of the X-Men franchise before Marvel buys it” by re-releasing a PG-13 version of Deadpool 2 next month

Naked and Afraid Season 4 is now casting. Do you not have what it takes? (i.e. clothes)