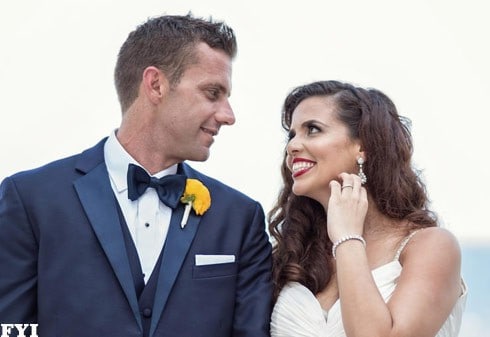 Nick Pendergrast and Sonia Granados were one of the brave couples who met and married on the fourth season of Married at First Sight. Their relationship was rocky throughout the show, but they ultimately decided to stay together at the end of the experiment. Nick and Sonia’s marriage lasted a year before the pair confirmed their split in March.

Now, just four months later, Nick announced that he has not only moved on from his marriage to Sonia but is expecting TWINS with his girlfriend and AfterBuzz host Heather Yerrid. According to People, Heather is 9 weeks into her pregnancy.

Thank you @people for the honest and exciting story (link in bio) about @heatheryerrid and I’s two miracles! It’s nothing short of a blessing when a woman is told she can’t have kids and then becomes pregnant with #twins ???? It’s still early but we are so excited we couldn’t hide it any longer. Sometimes the most difficult roads lead us to our greatest joy! #mafs #marriedatfirstsight #love #life #twindad

Nick and Heather likely conceived their twins in early May which is less than two months after Nick and Sonia announced their divorce. This timing has led many to wonder if there was an overlap between the two relationships.

One of the biggest critics of the pregnancy announcement is Sonia, and she’s venting her frustrations all over Twitter.

Wish Heather n Nick well but I have a right to b irate 4 many things n tweet what I want! This is my twitter(well the network but ya know?)

Thinking about today and man some humans really suck! Just be honest and truthful!

He's pregnant by his life coach who I've spoken to. Who messages me during the show that him and I were meant to be. Are you serious?!?

I wish them the best. Not for them but for the beautiful angels that are going to be born!

Im not saying he cheated on me with her but I am saying there was some real shade coming from both parties.

Based on these tweets, it looks as though there’s drama surrounding Nick’s honesty with Sonia throughout their marriage.

Other tweets indicate there could be some questionable behavior when it comes to Heather’s relationships with other men from the cast of MAFS. Lillian Vilchez, also from MAFS season four, joined in on the discussion.

Dislike involving myself but I can't deal with bold face lies cause she reached out to Tom as well to "coach him". https://t.co/xHET36g9sD

Nope… she never ever reached out to me whatsoever

Lilly and Sonia’s tweets imply that Heather, who describes herself as a “Success Vitality Career Coach”, targeted the men from the show in order to earn their favor while being “judgmental” of the women.

Nick, on the other hand, is doing his best to rise above the criticism and put the focus back on becoming a father.

Say what you will to make your day more exciting. This is #inaccurate and Sonia knows that too. Babies are miracles. Focus on that