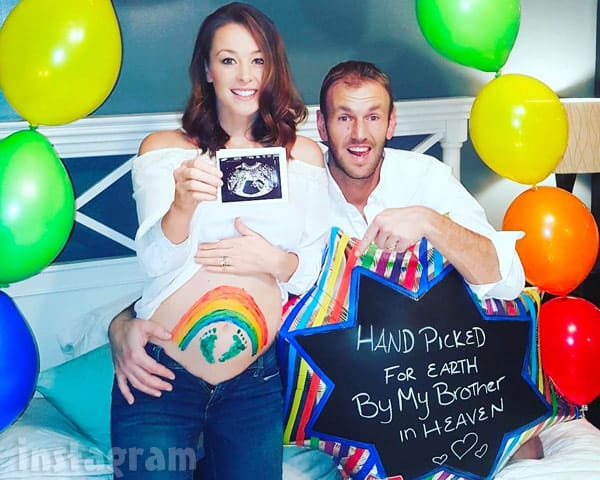 Last July, Married at First Sight couple Jamie Otis and Doug Hehner announced they were expecting their first child together on the Today Show just days after a doctor recommended that Jamie terminate her pregnancy because there was “very little amniotic fluid for the baby.” Less than a week after their very public announcement, Jamie and Doug took their doctors’ advice (after getting second, third, and fourth opinions) and chose to induce a miscarriage.

After repeatedly trying to get pregnant again, the couple shared the good news yesterday that Jamie is currently 10 weeks pregnant! “Doug and I have been praying and not so patiently waiting to have our rainbow baby since we lost our first born, Johnathan Edward, in July 2016,” Jamie revealed to People. (In case you were unaware, a “rainbow baby” is a child born after a miscarriage, stillbirth, neonatal death or infant loss.)

Jamie posted the announcement photo above with husband Doug on Instagram in which she has her belly painted with a rainbow and Doug is holding a chalkboard sign that reads “Hand picked for Earth by my brother in Heaven.”

“We are PREGNANT!!!” Jamie captioned the picture. “Our sweet Baby Hehner is due this August.”

Jamie says that the pregnancy was confirmed in December, on the same day that Jonathan was due. She broke the news to Doug with a framed photo and this note from their unborn child:

My big brother, Johnny, told me today was the day he was due to be with you & mommy. He wasn’t able to be here so he sent me instead.

He doesn’t want you to be sad during the holidays without him; instead be happy because he gave me to you! I can’t wait to meet you in August!

You would think that experiencing the tragedy of losing their first child so publicly would make Jamie and Doug wary to announce this pregnancy at just ten weeks, but the public loss of their son Jonathan seems to have had the opposite effect. “If I hadn’t gone through a public loss I think I would’ve been 10 times more depressed,” Jamie tells WomansDay.com. “It was strangers reaching out to me through my blog and sharing their stories with me — some of them for the very first time because they felt like they had no one else to talk to when they had gone through their loss — that comforted me.”

But why would Jamie choose to buck tradition and announce her pregnancy before her second trimester? Especially given her prior experience? Woman’s Day sums it up well:

The risk of miscarriage drops significantly after the first trimester and the conventional wisdom is that expectant couples should wait until then to reveal the pregnancy, presumably to lessen the chance that they’ll have to double-back on the big news. But women like Jamie feel that leaving a mother to mourn in private, thereby forcing her to put on a happy face at work and around friends and family, is cruel.

And Jamie expounded in her caption for this jubilant Instagram photo: 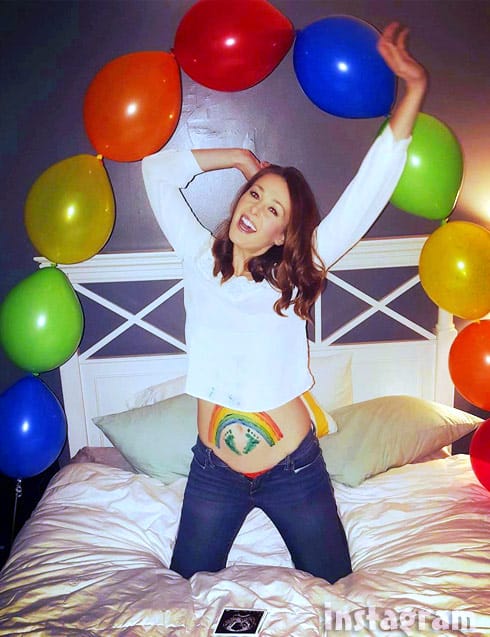 We are 10 weeks PREGNANT!?Ahh, happy doesn’t even begin to describe this feeling!? The moment I found out I was pregnant I began telling everyone. I wanted to share with family and friends before announcing publicly, but I knew I wasn’t waiting the socially acceptable “3 months” like I was “supposed” to. My hubby and I shared why we chose to announce our pregnancy “early” with @womansdayaus. (Link in bio.) We as women are told to wait to share you’re pregnant until you’re in the “clear” (in second trimester). This is supposed to “protect you” since your chances of loss significantly reduce once you reach your second trimester. You wouldn’t wanna announce you’re pregnant and then lose the baby, right? …So women everywhere go around keeping their pregnancy secret “just in case.” But then when they do suffer a loss (1 in 4 pregnancy ends in loss) they have to disguise the pain and pretend like nothing happened bc no one ever knew they were even pregnant. What a lonely, isolating feeling. ? After I had publicly lost my son – countless women reached out to me to share their story of loss. I received comfort from around the world … but a lot of these women who reached out to comfort me had never had the chance to share and/or talk about their sweet baby who lives in heaven – no one ever knew they were pregnant to begin with. Miscarriage is as taboo as it gets so you certainly don’t mention it in passing or at work or at a dinner with friends. Instead they would paste a smile on their face and wipe the tears so it wouldn’t be “awkward.” Women should not have to go through this after such a devastating loss. Where’s the support for 1 in 4 women? Furthermore, hiding anything doesn’t give you the opportunity to be EXCITED about it. I feel like it should be each woman’s choice whether they want to keep their pregnancy private or shout it from the rooftops! Who made the rule for women to have to wait “just in case?” I know I’m not the first to announce my pregnancy early and I hope I’m not the last. ? ….my hubby and I have squashed fear with so much love, joy, and happiness! We are THRILLED for our #rainbowbaby!?#womensupportingwomen #preggers #overjoyed #babylove

Congratulations to Jamie and Doug!

Married at First Sight Season 3: Where are they now?