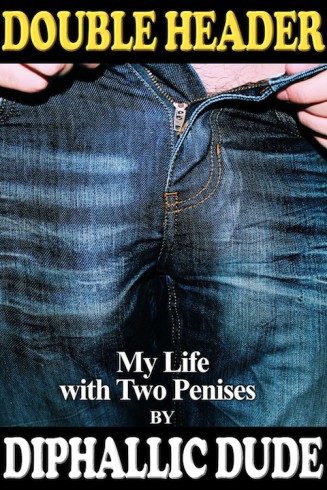 Who is the Double Dick Dude? Is he real? An anonymous but increasingly popular man, known as “DoubleDickDude” on Reddit and “Diphallic Dude” elsewhere, has written a tell-all memoir describing his life as the bearer of two separate and fully-functional penises.

It was only one year ago when the bisexual DoubleDickDude–henceforth known as DDD–lit up the internet with a Reddit AMA that explained his extraordinarily rare condition, and enlightened interrogators, who asked questions such as “When you masturbate, how do you control the mouse,” “Have you ever peed and had both do the forked stream,” “You ever just surprise a partner with them,” and “Do you have a favorite?” A series of interviews followed, as did a mention on Conan, and a popular Tumblr. (NOTE: It’s possibly the most NSFW link you will click this month. Today is Saturday, but, for those of you at work or around small children, maybe wait until later.)

Now, the DDD has put out a book to better-inform people about his condition, and to regale them with crazy tales from his crazy tale-ridden life. The man’s condition, which is called diphallia, is generally life-threatening in boys, because of the damage it can do to the internal structure of the body. So, when his mother always told him that he was special, she wasn’t just referring to his two wangs: the guy really is a medical miracle. Only about one-in-six-million men have diphallia at all; DDD is the only fully-healthy, fully-functional, fully-formed adult male with his condition that he knows of.

And he’s also had a whole lot of sex. DDD’s own estimate puts the number of partners he’s had at at least a thousand. (He’s twenty-five years old, in case you were wondering.) Trying to cram in all this medical and emotional information while simultaneously talking about sexy fun times can make for something of a chaotic style: in the words of one reviewer, “At times, it feels as though this book unexpectedly transitions from a loose biography to a steamy (and sometimes hardcore) erotic novel.” But, as is the case with most people who sample DDD’s goods, the majority come away from the book happy–a little shaky, and with wider eyes than they had before, but undoubtedly happy.

(Photo credit: Who is the Double Dick Dude via Amazon)

VIDEO Justin Bieber kisses man, then goes out of his way to assure us he’s “not gay”