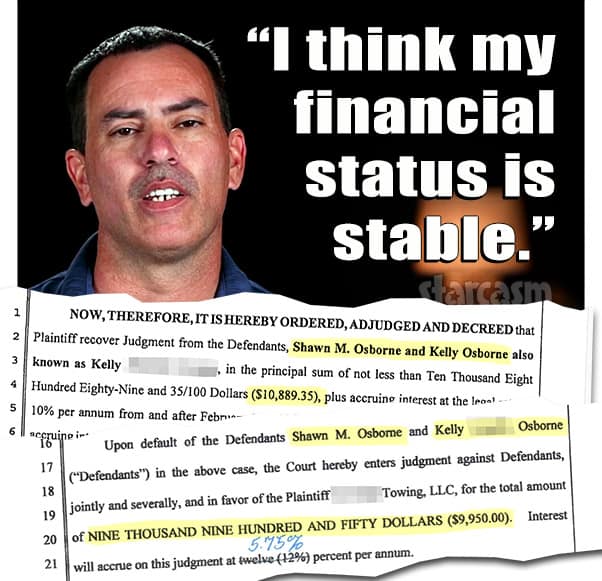 On the current season of WE tv’s Love After Lockup, Shawn Osborne seems to be serving as a sugar daddy to his prison bae Destinie Folsom. In addition to spending “thousands” of dollars on Destinie while she was incarcerated, Shawn also shelled out $5,000 cash for her bond and subsidized her gambling habits to the tune of $500 a day (according to Destinie). That doesn’t even figure in the cost of furniture, clothes, and “sushi food!”

Shawn being presented on screen (and to Destinie) as a sugar Daddy Warbucks looks to be in stark contrast to reality. As we previously reported, the father of six has a rather frightening financial history that includes bankruptcy, multiple eviction filings, and garnished wages. And those financial problems are not a thing of the distant past, as evidenced by the fact that Shawn’s former employer won a judgment of just under $10,000 against him earlier this year!

The towing company that Shawn worked for while living in Arizona won a default judgment for $9,950 against him in an Arizona court back in February. In addition to that amount, the ruling adds that “interest will accrue on this judgment at 5.75 percent per annum.”

As viewers of the show are well aware, Shawn relocated to Nevada. An attorney for the towing company tracked him down and filed an Application For Registration Of A Foreign Judgment on August 28.

That was a little more than a month after Shawn made his Love After Lockup debut on July 17. Perhaps Shawn’s former employer saw him on the show and figured they would try to get some of that sweet, sweet WE tv money?

The principal sum in that judgment was $10,889.35. The judgment included a 10% interest rate for the 13 months prior to the judgment, as well as an accruing 4.75% interest rate until it was paid. There was also $4,000 in attorneys’ fees as well as $394 for costs incurred by the plaintiff.

As mentioned in our previous post, Shawn has had his wages garnished in the past. It’s unclear if the issues with his former employer is connected to issues with garnished wages stemming from a previous judgment(s).

The mother of Shawn’s children, Kelly, is named as a co-defendant in both cases. It’s interesting to note that she has Shawn’s last name of Osborne in the filings. I still can find no evidence of a marriage, but it does appear that she must have legally changed her name at some point.

In summary, it seems quite clear that Shawn is deceiving Destinie and viewers in regards to his finances. The big question is: how much of that deception is courtesy of show producers?

As many viewers have pointed out online, Shawn appears to be living in an Airbnb or something similar. It really does seem like producers wanted to ramp up the sugar daddy angle just so they could have the on-screen drama when Destinie finally catches a glimpse behind the green curtain at Shawn’s actual financial situation. One thing’s for certain — that moment is not going to be pretty!

To keep up with Shawn and Destinie’s on-screen love story, be sure to tune in to the Love After Lockup season finale tonight at 8/7c! And then you can continue to follow the couple’s fairy tale romance when they return for the new season of Life After Lockup premiering November 20!