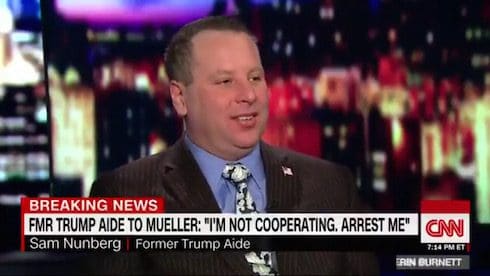 VOX – Former Trump aide Sam Nunberg went a little crazy yesterday, doing a series of increasingly defiant TV interviews in which he said he was actively refusing to comply with a subpoena from the special counsel’s office. Daring Robert Mueller to come and arrest you doesn’t seem like the best legal strategy in the world

THE BLEMISH – The guy who stole Frances McDormand’s Oscar filmed a short video of himself with it and uploaded it to YouTube, then walked around with the statue at an afterparty and told people he had won it for “music.” If you’re an aspiring talent agent and want to book this man for your Z-list, his bail is $20,000

JEZEBEL – If Oscars fashion and afterparty talk are your thing, here’s a super fun and thorough rundown of both. Of special note: Megan Mullally’s flying eagle dress; Rashida Jones’ elegant garden gown; Bleona Qereti’s boob-heavy display; and Mary J. Blige’s near-perfect mirror of an Oscar statuette if it were made of butterflies

REALITY TEA – Former RHOC star and current St. Louis citizen Meghan Edmonds returned to Southern California to pose for some baby bump-tastic bikini and yoga pose shots. And as further proof of how the reality TV life will drain a person, Meghan looks much happier these days even if she does have to live in Missouri

LAINEY GOSSIP – At this point, saying out loud that you’re not an especially big fan of Tiffany Haddish’s shtick means you’re risking side eye at a minimum and physical harm at worst

UPROXX – Kevin Hart went on Conan last night and explained why he made a drunken run onto the field after the Super Bowl. Basically, it boils down to “I wanted to hold the trophy” and “I was drunk,” but in Kevin Hart’s hands those two phrases become an entertaining tale

DLISTED – A British Ticketmaster spilled the tea on Beyonce and Jay-Z’s summer tour. Judging by the leaked date, they’re going to play stadiums, which makes sense given their incredible popularity but is also kind of a bummer for the simple fact that stadium shows leave most fans sitting too far away to have a really great experience