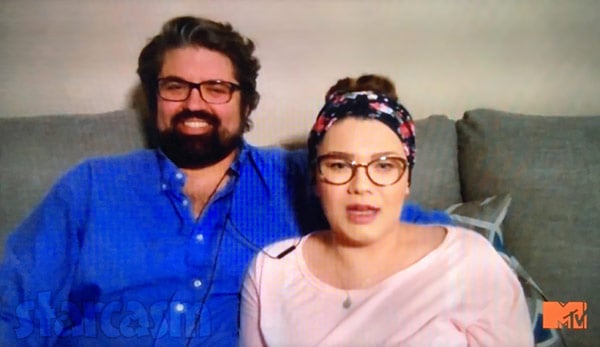 Monday night’s Teen Mom OG After Show featured OG dad Tyler Baltiera and Teen Mom Young and Pregnant mom Brianna Jaramillo live in the studio, but it was pregnant Amber Portwood calling in on Facetime who stole the show by revealing the full name of her baby!

The moment went down thanks to a question from Twitter user @JoeyDonutzz69 who asked: “Amber I’ve been dying to know, have you picked out a name for the baby?”

Amber didn’t even hesitate with her response. “His name is going to be James Andrew Glennon.” Amber then explained that they are naming their son after Andrew’s dad, James Glennon, who “died unexpectedly on October 19, 2006, from a blood clot resulting from surgery for prostate cancer,” according to IMDB.

If you were wondering why James has an IMDB bio, that is because he was an EMMY Award winning cinematographer whose resume includes HBO’s visually stunning series Deadwood and the film About Schmidt. Andrew’s grandad is Bert Glennon, also a major Hollywood cinematographer who worked with some of the most well respected directors in the history of film. You find out more about Andrew’s amazing Hollywood pedigree here.

“So, it’s [Andrew’s] name and his dad’s name together,” Amber continues.

Amber had previously revealed the name James in a Twitter exchange with her brother Shawn “Bubby” Portwood back in January, but she had not confirmed it, and she had not revealed the baby’s middle name.

Speaking of Bubby, Shawn grilled Amber pretty hard about Andrew in Monday night’s episode, citing her dating history as reason to be concerned about any potential skeletons that may come dancing out of Andrew’s closet. Amber is asked about Bubby’s grilling by After Show host Nessa.

“I’m real happy that my brother’s like that,” Amber admits. “He’s wary of everybody. I should have listened to him with Matt.” Amber laughs a bit. “But you know what? In the end, he actually really liked Andrew, so it made me feel so much better about, you know, this whole relationship. Because if my family doesn’t like him, I mean, I’m screwed. I’m going to hear about it for the rest of my life.”

Amber and Andrew (aka #Ambrew) then played along in a segment titled “Cross Examination” in which special After Show co-host EJ Johnson asked them both a series of questions:

EJ: Amber, what was your biggest concern when you were introducing Andrew to Bubby?

AMBER: Honestly, I just thought that my brother, because he’s so blunt, that he was gonna be, just, kind of rude to him and asking him 20 questions about what he does as a career, or, you know, what’s his plans, if he’s going to take care of me.

EJ: Andrew, you told Bubby you never watched Amber on Teen Mom. Did you ever Google Amber after you started dating her?

AMBER: Yes he did!

EJ: Andrew, were you ever concerned that you could possibly be seen as a rebound?

ANDREW: Um, no, not really. It’s different, you know? I mean, you go forward.

EJ: And finally, you told Bubby you didn’t have any plans to get married. Is this still the case?

AMBER: I mean, yeah, we haven’t talked about it, but he’s saying these things every now and again when people ask questions. So I don’t know what he’s thinking.

That wrapped up Amber and Andrew’s segment on the After Show.

So what do you think about the name James Andrew Glennon? I gotta confess I was hoping Shawn would get some name props! Maybe James Bubby? ?