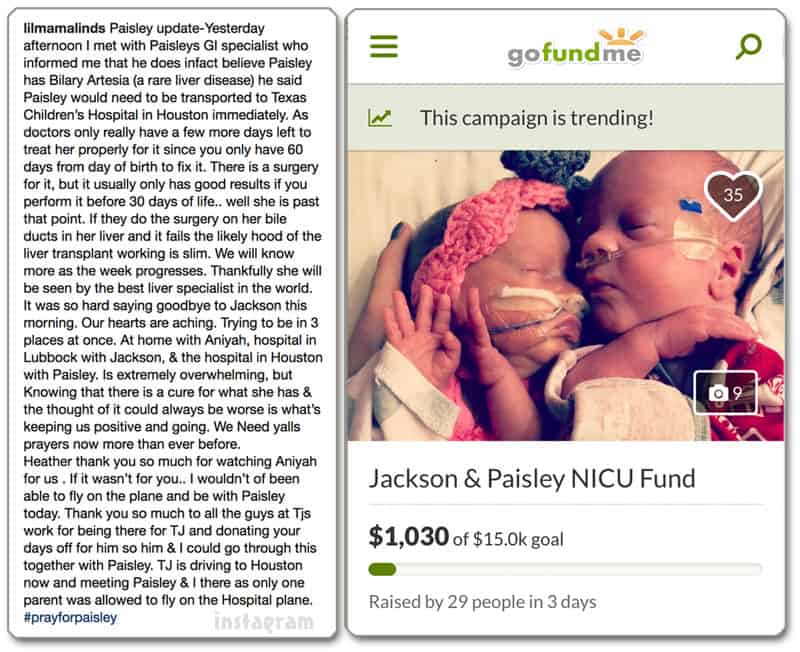 Former 16 and Pregnant star Lindsey Nicholson flew to Houston with her premature newborn twin daughter Paisley on Wednesday after doctors diagnosed Paisley with Bilary Artesia, a very rare liver disease that requires immediate surgery. Lindsey was forced to leave her other premature twin, son Jackson, in a Lubbock hospital so she could be with Paisley when she undergoes the procedure in Houston.

Lindsey’s update is very frightening because she reveals that the surgery “usually only has good results if you perform it before 30 days of life” and Paisley “is past that point.”

Here is the full update from Lindsey on Wednesday:

Paisley update-Yesterday afternoon I met with Paisleys GI specialist who informed me that he does infact believe Paisley has Bilary Artesia (a rare liver disease) he said Paisley would need to be transported to Texas Children’s Hospital in Houston immediately. As doctors only really have a few more days left to treat her properly for it since you only have 60 days from day of birth to fix it. There is a surgery for it, but it usually only has good results if you perform it before 30 days of life.. well she is past that point. If they do the surgery on her bile ducts in her liver and it fails the likely hood of the liver transplant working is slim. We will know more as the week progresses. Thankfully she will be seen by the best liver specialist in the world. It was so hard saying goodbye to Jackson this morning. Our hearts are aching. Trying to be in 3 places at once. At home with Aniyah, hospital in Lubbock with Jackson, & the hospital in Houston with Paisley. Is extremely overwhelming, but Knowing that there is a cure for what she has & the thought of it could always be worse is what’s keeping us positive and going. We Need yalls prayers now more than ever before.

Heather thank you so much for watching Aniyah for us . If it wasn’t for you.. I wouldn’t of been able to fly on the plane and be with Paisley today. Thank you so much to all the guys at Tjs work for being there for TJ and donating your days off for him so him & I could go through this together with Paisley. TJ is driving to Houston now and meeting Paisley & I there as only one parent was allowed to fly on the Hospital plane. #prayforpaisley

As you might imagine, all of this is taking a huge toll on Lindsey and her family — and that includes a financial one. In an attempt to help the Nicholsons with the financial burden, there is now a GoFundMe campaign set up with a goal of $15,000 — which is not that much considering that it was $5,400 for each day that the twins were in NICU. And that doesn’t even touch on the expense of Paisley’s surgery and potential liver transplant procedure.

I’ve had a lot of people ask me if this gofundme account is real and if the money was truly going to my family for Jackson & Paisleys medical costs. It IS real & it is NOT a scam. If every single one of my followers donated just $1 we could reach our goal. Thank you so much in advance for donating. Means the world to us?? link is in my bio #prayforpaisley #bringthenicholsontwinshome https://www.gofundme.com/jackson-paisley-nicu-fund

Here is the full description from the GoFundMe campaign page, which was initially written prior to the Bilary Artesia diagnosis. Lindasey has since updated the campaign description with her post above. 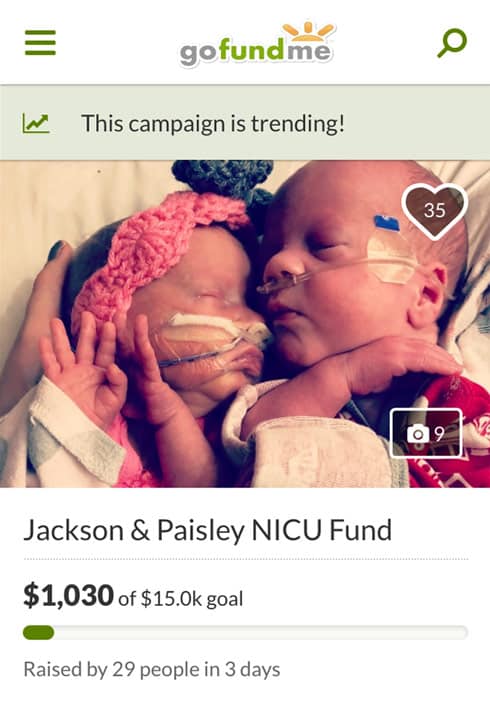 Lindsey Nicholson & T.J. Nicholson, mother and father of these two adorable twins named Jackson & Paisley Nicholson have been fighting a long hard battle of medical issues. Lindsey was first dilated at 5cm at just 26 weeks and fought to keep those babies healthy and safe until it was a safe time to be born. The challenge was a hard one but by putting their trust in all their prayers she made it to 29 weeks and 4 days, when these two cuties were born. Jackson- 3lbs 5oz & Paisley 2lbs 15oz.

On November 4th Lindsey got a call to come to the NICU as Paisley had Staph infection. They had to do spinal block to see if it moved into her spine and caused meningitis. She also needed a blood transfusion at the time. The results came back and Paisley did have staphylococcal bacterial meningitis. They were giving her the strongest antibiotics possible and doing a head ultrasound. Paisley’s blood cultures were continuing to stay positive and the antibiotics were not working. Thankfully the meningitis didn’t go to her brain or heart.

Jackson on the other hand was then diagnosed with E. Coli & Staph infection that has turned into meningitis as well. They did a head and heart ultra sound on him to see if its gone to either places as well, thankfully it did not.

Finally on November 15th Paisley got her negative blood culture!! They ended up having to use an antibiotic that’s most likely never been used on a baby before to kill the staph infection. Doctors also decided to run a CT scan, X-ray, & multiple ultra sounds because they were concerned about her liver function as blood work showed some worrisome numbers. They found a blood clot in her main portal which is why they think her infection lingered for so long.

On November 29th Jackson FINALLY got to move to a bassinet and get out of the incubator! The last thing Jackson needs to do in order to go home is taking his full feeds from breast/bottle without using his feeding tube. As of now he’s only taking about 35% of feeds without his feeding tube.

On December 1st Paisley FINALLY got to move to a bassinet and out of her incubator. However, they got Paisley’s liver biopsy and Doppler results back and the findings were not very good. All of Paisleys care providers are meeting to go over everything together and to figure out her treatment plan!

Today, December 4th, Lindsey got to hold her twins together for the first time! This was the babies first interaction they had with each other since they were in the womb. Lindsey was told Paisley may have a congenital fitula in her liver and possibly biliary atresia. They will know soon if she does for sure. If so Paisley will be transported to Houston.

Everyone is praying Jackson was able to give his sister some strength and love that only your twin can give you. Lindsey and T.J. have an older daughter named Aniyah. Although it seems Lindsey and T.J. have been so strong through all of this they both just want their babies to come home and be with the family.

The Nicholson’s medical bills will be outrageous. Each day it costs $5400 for the twins to be in the Nicu. That’s not including any treatment they need either. The time Lindsey is having to take off from work. Any little bit will help relieve some stress. Please help however you can and share this with your friends and family. T.J., Lindsey, Aniyah, Jackson & Paisley are so grateful for all the love, support, and prayers. #PrayForNicholsonTwins