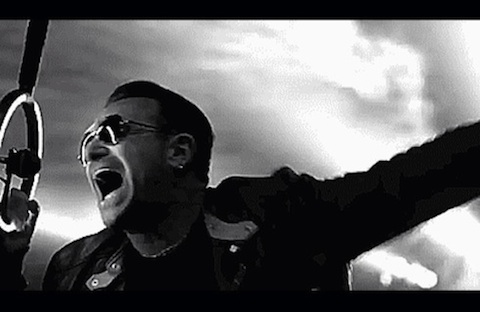 The fallout from Bono’s Bicycle Bonanza continues to worsen. The U2 frontman, who was involved in a high-profile and “high-energy bicycle accident” in New York’s Central Park last November, has revealed that the laundry list of injuries he deals with on a daily basis might keep his beloved guitars out of his hands…forever.

Those injuries were more akin to what you might find from a car crash: Bono suffered “a facial fracture involving the orbit of his eye, three fractures of his left shoulder-blade, and a fracture of his left humerus bone in his upper arm,” as devotees will recall. The “fracture” of the humerous bone was a hell of a thing: it involved the bone shattering into half-a-doen pieces and protruding through his skin.

The Bon-ster was characteristically upbeat when writing of the trauma in a New Year’s Day blog post, but pulled no punches about the severity of the situation–and not just because he also can’t punch anything right now. In the man’s own words:

I broke my hand, my shoulder, my elbow and my face but the real injury this year was to my Irish pride as it was discovered that under my tracksuit I was wearing yellow and black Lycra cycling shorts. Yes, LYCRA. This is not very rock ‘n’ roll. Recovery has been more difficult than I thought… As I write this, it is not clear that I will ever play guitar again. The band have reminded me that neither they nor Western civilization are depending on this. I personally would very much miss fingering the frets of my green Irish falcon or my (RED) Gretsch. Just for the pleasure, aside from writing tunes. But then does the Edge, or Jimmy Page, or any guitarist you know have a titanium elbow, as I do now? I’m all elbows, I am.

Bono, or “Little Bonticlees” (as he now likes to be addressed), also called Jimmy Fallon “a better Bono than I could ever be,” referring to the Tonight Show host’s Bon-tastic impersonation of the singer when U2 was booked for its weeklong residency on the program.

U2 has a full tour booked in support of its latest album, the iTunes-sponsored debacle Songs of Innocence. Despite rumors that they might be forced to cancel or postpone dates due to Bon Scott’s health, the band has recently added a slew of new dates.