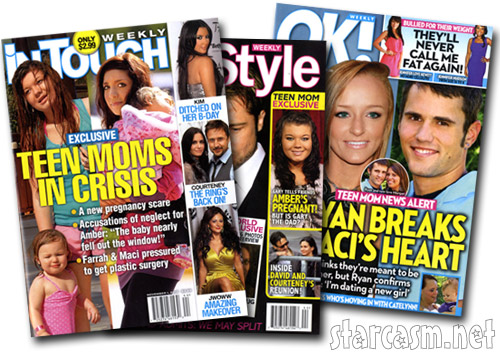 The four young ladies of Teen Mom are a tabloid sensation! Being a fan myself it kind of sucks because now we have to constantly wade through a murky flood of rumors, speculation and outright lies in our attempts to keep up with all the off-screen mama drama. Every week someone is pregnant again, someone had a boob job, someone breaks up, someone gets back together and someone has a deep dark secret revealed by a distant relative or neighbor with a propensity for telling tall tales and the desire to make a quick buck.

Anyway, here’s the rundown of this week’s Teen Mom tabloid cover stories. As far as determining which ones are true and which ones aren’t you might as well print them out, pin them to a wall and throw a dart. That being said, it is fun! It’s sort of like fan fiction sanctioned under the guise of journalism! 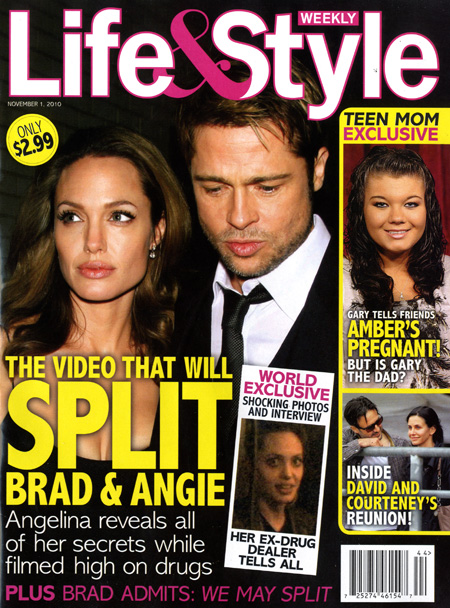 An “insider close to Amber Portwood” tells Life & Style magazine exclusively that Amber is telling people she is pregnant again. The insider reportedly learned that Amber told Gary she was pregnant during their recent trip to Tennessee and Gary has since been spreading the word.

“Yes, I’ve heard that Amber is pregnant,” Jordan Sanchez, Gary’s best friend, tells Life & Style. But he’s not even sure Gary’s the father. “Amber has been with at least one other guy while she’s still with Gary. She likes to explore.”

Jordan goes on to say that it may all be a cruel hoax, saying “Pretending to be pregnant could just be another example of her trying to manipulate him and keep people interested in the show.” 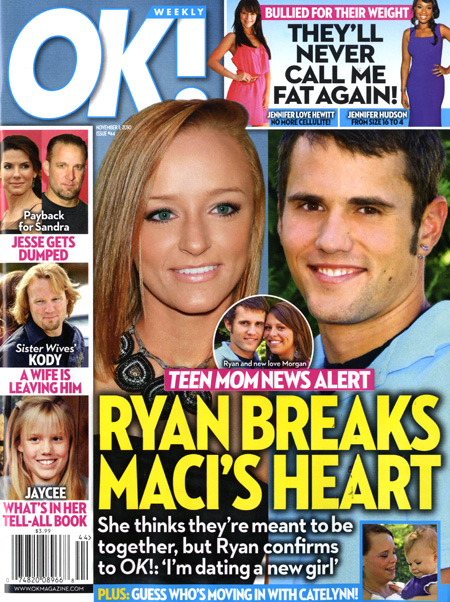 Ryan talks with Ok! and says he and Maci are spending more time together and “trying to be nice to each other for Bentley’s sake.” The magazine once again suggests that Maci was open to getting back together with Bentley’s daddy, but he says no – partly because he has moved on to a new girlfriend!

The latest smitten kitten is “a pretty 18-year-old brunette named Morgan.” The magazine promises “an OK! exclusive interview with Ryan about his new love!”

PLUS! Guess who’s moving in with Catelynn? (I have no idea) 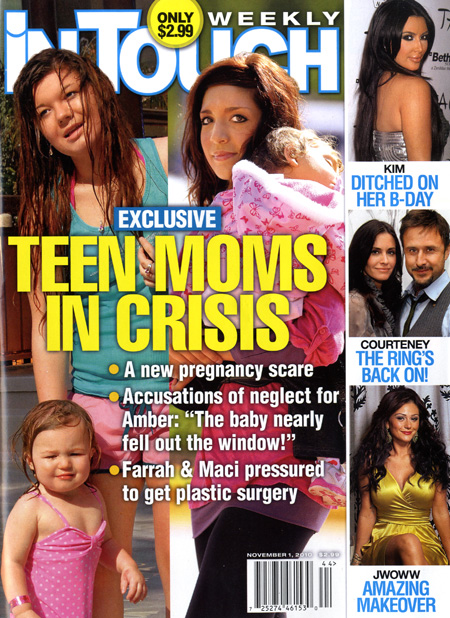 TEEN MOMS IN CRISIS
(From In Touch Weekly)

There isn’t any additional information about their cover stories available from the In Touch Weekly website, so all we have are the bullet points:

• A new pregnancy scare
• Accusations of neglect for Amber: “The baby nearly fell out the window!”
• Farrah and Maci pressured to get plastic surgery

My guess is that all of these are rehashes of the other tabloid headlines from the last couple weeks. The pregnancy scare is probably the same Amber rumor from Life & Style above.

The accusations of neglect for Amber and Leah nearly falling out the window are probably from the same report of a neighbor in Anderson that said Amber left Leah unattended while arguing in the front yard.

We’ve already heard about Farrah possibly having a boob job, but the Maci plastic surgery story is new! I wonder what that could be. Another boob job? Post-pregnancy tummy work? perhaps she had her feelings for Ryan surgically removed?

Tune in next week for the newest batch of Teen Mom tabloid headlines! (Maybe Catelynn and Tyler can score a “contemplated kidnapping Carly” story straight from Butch and April’s mouths!