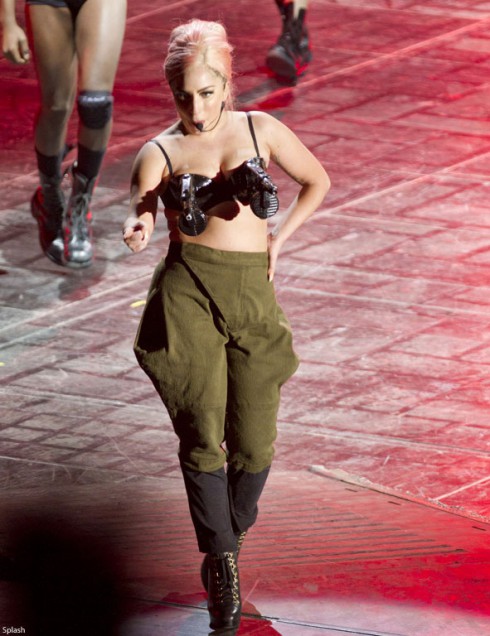 The public usually gets Lady Gaga in pretty controlled doses via tweet, occasional interview, and her songs, but this official deposition really sheds a light on the real Lady Gaga. It’s an understatement to say that Stefani Germanotta has let her Lady Gaga persona get to her head.

The New York Post got their hands on quotes from Gaga’s deposition, and they’re jaw-dropping. Jennifer was present at the videotaped deposition, which lasted 6 hours on August 6, 2012.

Gaga goes out of her way to insult Jennifer, saying she’s a “f**king hood rat who is suing me for money that she didn’t earn,” and literally calls her a slave who wanted to be queen:

Gaga explains that Jennifer should be grateful for even getting the $75,000 a year salaried job because she wasn’t qualified or educated enough for it. She also says Jennifer took advantage of thinks like Gaga’s discounts at designers like YSL:

“I expect there to be a certain level of, like, you know, knowledge and academia about, like, your job.”

“I’m quite wonderful to everybody that works for me, and I am completely aghast to what a disgusting human being that you have become to sue me like this. Because she slept in Egyptian cotton sheets every night, in five-star hotels, on private planes, eating caviar, partying with [photographer] Terry Richardson all night, wearing my clothes, asking YSL [Yves Saint Laurent] to send her free shoes without my permission, using my YSL discount without my permission.”

Gaga said the biggest problem she had with Jennifer was that she wouldn’t lay out her stuff for her:

“One of the biggest problems I had with Jen is that I felt like she didn’t enough lay out all my stuff for me” while traveling, because “there is 20 bags and there is only one me, and I can’t sift through everything. She would only open a couple of bags, and it was very stressful for me because then again on my off days I couldn’t really have a day off because, you know, I weigh 115 pounds, and I was trying to move these huge, big luggages all by myself in the room, and I did it all the time — by the way, she was asleep until 12:00 most of the time, so I was very often waking up and moving my own luggage and doing s–t by myself, and it was — it was a problem that I had.”

In regards to the alleged overtime, Gaga insisted that all of her employees only work 8-hour days, explaining that unlike regular jobs, the eight hours are “spaced out throughout the day.”

“You don’t get a schedule that is like you punch in and you can play f–king Tetris at your desk for four hours and then you punch out at the end of the day. This is — when I need you, you’re available.”

She says that Jennifer does not deserve one penny over the $75,000 they agreed to, and that she’s going to give the money Jennifer asked for to “my employees that work hard for me now that deserve it. I’m not going to give it to her so she can go to Intermix and buy herself a new tube top.”

Gaga says she realized Jennifer was not her friend during a 2011 incident in Paris. First, Gaga was upset because Jennifer was wearing Gaga’s clothes. They partied all night with celebrity photographer Terry Richardson after a fashion show, and Gaga says she was was so drunk she “was crawling on the streets in Paris, I was screaming.”

The next morning when Jennifer insisted on sleeping in the second bed, Gaga says she “flipped out at me, beyond belief when I told her no.”

“I said, ‘Jennifer, this is really inappropriate in front of Terry Richardson,’ and she was like, ‘Don’t I get some sort of seniority because I’ve been here longer and I’m your friend?’”

“And I remember those words as clear as day, because when your best friend looks you in the eye and says ‘Why can’t I have that seat on your private plane, I’m your friend,’ the first thing I thought was ‘You’re not my f**king friend.’ ”

Lauryn Hill gets prison time for not paying taxes

Kylie Jenner trademark battle: Can she really copyright her name?