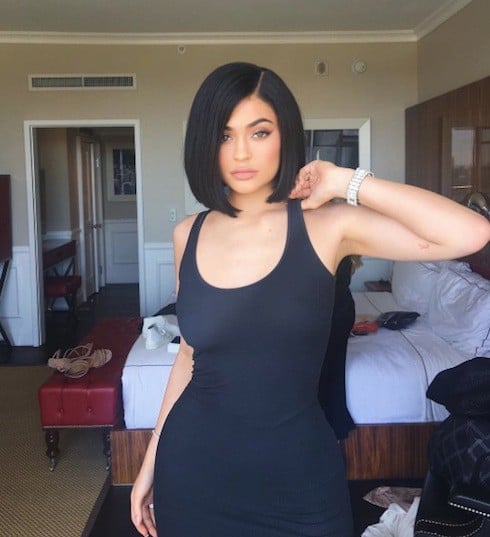 “Kylie Jenner reportedly pregnant” has become a common refrain of late, thanks to rumors about the 18-year-old budding fashion maven’s uterus spreading like peanut butter on a school-bound sandwich. We reported earlier this week that Kylie is, apparently, not pregnant (though she and 26-year-old boyfriend Tyga are said to be trying), a brand-new report has since allegedly confirmed that Kylie is with child. Except that Kylie herself took to Twitter to debunk the rumors…

What happened was that Kylie got fed up enough with all of the “Kylie Jenner reportedly pregnant” rumors to respond via social media. The youngest Kardashian rarely responds to rumors, partly because she has one of the largest social media followings in the world, and usually uses the medium to sell things. Kylie fired off a series of tweets intended to educate folks about the status of her womb; though she later deleted those tweets, Kardashian home network E! captured their contents.

“Omg. No I’m not pregnant,” Kylie began. “It’s been the same rumor for years & no baby. So when I decide to go to that next stage in my life…I’ll be the first to let you know…Not a weekly blog.”

However, within two hours of those updates’ deletion, In Touch shared their take on the situation, veering as hard in the other direction as they possibly could. Reportedly, Kylie’s alleged pregnancy is not sitting well with Momager Kris Jenner, mostly because “Kris isn’t a big fan of the relationship” between Kylie and Tyga. (And to be fair to her, who is?)

The magazine’s source goes on to add that Kris “knows…no one will be able to keep Kylie and Tyga apart,” and that “Kylie’s friends are convinced she’s pregnant.” The friends are said to be “unable to talk about anything else.”

Tyga, who also has social media, offered a rare and cryptic update involving Kylie Jenner as the dual stories began to break: