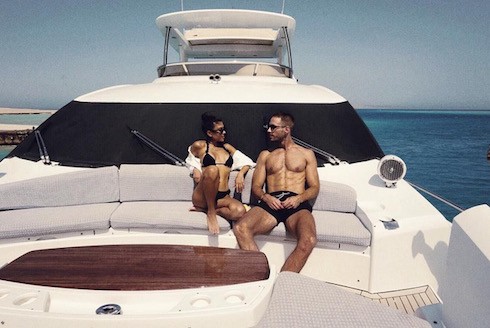 Kourtney Kardashian and Younes Bendjima have been at the heart of many a tabloid rumor since they confirmed their relationship earlier this year. Given the fifteen-year-age difference between them (he’s 23; Kourtney’s 38), it’s no surprise that many of those rumors have to do with whether or not Younes got Kourtney pregnant or Kourtney decided to get pregnant on the DL. According to the latest report, it’s a mix of both: OK Magazine has it on good authority that Kourtney Kardashian wants a baby with Younes Bendjima, and the sooner the better.

Their take claims that Kourtney has “fallen harder than she ever expected” for Younes, and that the model “could become”–at any moment, it seems–the father of her fourth child. OK’s insider dished thusly: “In the heat of the moment they’ve said they want to make a baby. At first, she’d laugh it off later, but now she’s told him she’d love to have a child with him. She thinks he’s so sexy and mature beyond his years.”

Devoteés will recall that this is the same sort of thing insiders said back when Kourtney’s sex romps with Justin Bieber became public knowledge, along with sources supposedly close to Justin saying that he liked how mature and MILF-y Kourtney was. And Gossip Cop was quick to rain on this particular parade, responding that “the story is fabricated” and “a reliable source close to Kardashian” can confirm that nobody in Kourtney’s “trusted inner circle” has heard anything like it.

In a weird way, though, I kind of hope it is true–not the baby fever part, but the “heat of the moment” caveat. Normally the anonymous quotes associated with their gossip are a bit more banal; this one is a rare moment of humanity. After all, it’s a whole lot easier to believe that Kourtney Kardashian wants a baby when she’s just finished having crazy acrobatic model sex with her impossibly handsome, not-Scott-Disick partner. Who among us hasn’t thought or outright said something similar while caught in the throes?