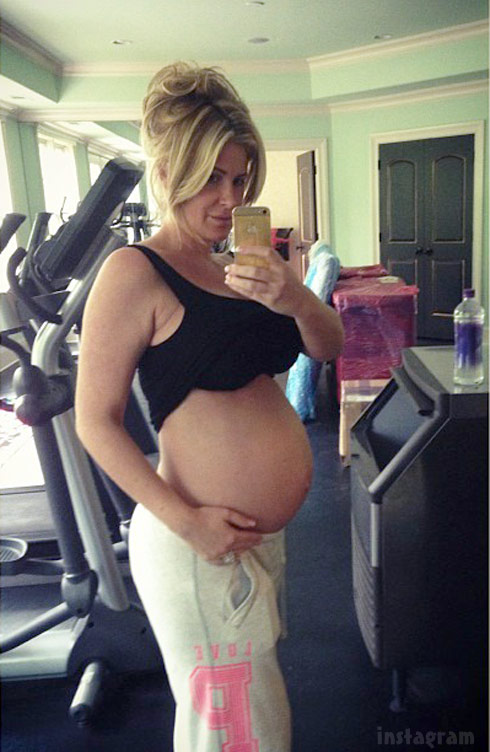 The Real Housewives of Atlanta and Don’t Be Tardy star Kim Zolciak is currently expecting her third child with husband Kroy Biermann and the 35-year-old soon-to-be mother of five took to instagram Saturday to share a photo of her growing baby bump with fans.

“You asked for it …here is my baby bump this morning!!” Kim wrote about the picture, which is a near full-length selfie taken in the mirror of her home gym. In the photo Kim has her hair up and is wearing a belly-exposing black tank top with a pair of “Love Pink” Victoria’s Secret sweatpants — and she looks great! It’s good to see that she’s hittin’ the gym (I assume she doesn’t just use it for the large mirror to take photos) — she has said many times in the past that she isn’t a big fan of working out, preferring more passive ways of keeping thin such as elaborate body wraps.

Last week Kim’s stylist Shun Melson shared some less revealing photos of Kim and her bun in the oven along with the caption, “I been with @kimzolciakbiermann alllllllllllllllllllll day!!!!! Fun times filming.” 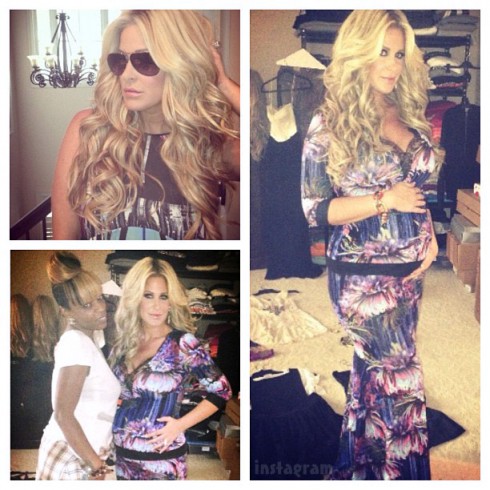 In case you were wondering what it was Kim was filming “alllllllllllllllllllll day!!!!!” at least part of it was an interview she and Kroy did with E! News in which they talked about the Kroy cheating rumors (based on text messages between him and another woman shortly after he and Kim met), the photos of Kim allegedly smoking a cigarette while pregnant (again), and Kroy recently adopting Kim Zolciak’s daughters, Brielle, 16, and Ariana, 12. Here’s an excerpt from the interview:

Kim also talked about the difficulties of dating with two children, and how she handled it with Kroy. “My daughters are very smart…I didn’t bring everyone around them,” Kim says in the interview. “I didn’t date a whole lot of people. The relationships I had were long-term, but sometimes my daughters would notice that the person I was dating, they were doing things to kind of win my daughters’ over to get to the mom—it wasn’t genuine. And my girls can see right through that crap. So with Kroy, it was just real…It worked from the very very beginning.”

And Kroy opened up about the adjustments he has had to make since becoming a father to Kim’s two daughters as well as the couple’s two sons, Kroy Jr. and Kash Kade. “In order to keep balance you have to have priorities,” Krpy says. “Our careers are our priorities, our kids, our health, our happiness…Before Kim and before the girls and before the boys, I lived a pretty regimented life. I’d wake up, eat breakfast, go to work, come home…it was pretty normal. Now, my house isn’t going to be as clean as it was before, but it’s not important. Those things are not important and it’s all about prioritizing and understanding.”

It has been reported Kim Zolciak will be returning in a guest role on The Real Housewives of Atlanta Season 6. There has still been no word on a Don’t Be Tardy Season 3.

The future of Kim’s hubby Kroy Biermann is a little less uncertain as he will once again be suiting up as a defensive end for the NFL’s Atlanta Falcons when the season kicks off later this year. But Kroy’s future isn’t completely without some question marks as he has reportedly been taking snaps at linebacker in training camp! Congrats to Kroy — being able to play defensive end and linebacker in the NFL speaks volumes about his talent and athleticism!