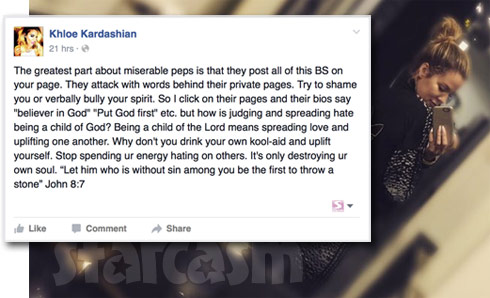 Being in the media spotlight all but guarantees that you will be the target of vitriolic negativity and hateful criticism. Few are in a brighter spotlight than the Kardashians, and even fewer have to deal with the amount of hate they receive on a minute-by-minute basis. In general, professional celebrities have learned to take it in stride, but, on occasion, the negativity gets too much and they respond.

Such was the case recently with Khloe Kardashian, who took to social media to call out hypocritical Christian haters before unleashing some seriously profane remarks coupled with the unfriendliest of hand gestures.

The whole thing started with a bootyful gym selfie that Khloe posted along with the caption “Shameless bathroom gym selfie ?” Here’s the photo, rotated for a bit of boom boom zoom: 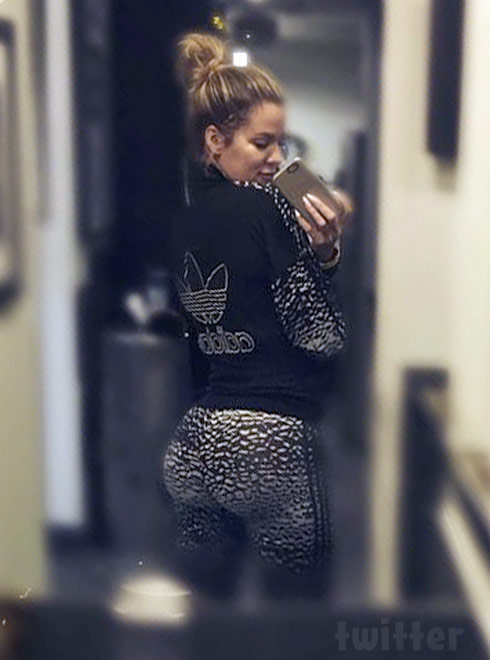 The photo drew the usual criticism from folks, as Khloe returned a couple of hours later with this frustrated message specifically aimed at her Christian detractors:

The greatest part about miserable peeps is that they post all of this BS on your page. They attack with words behind their private pages. Try to shame you or verbally bully your spirit. So I click on their pages and their bios say “believer in God” “Put God first” etc. but how is judging and spreading hate being a child of God? Being a child of the Lord means spreading love and uplifting one another. Why don’t you drink your own kool-aid and uplift yourself. Stop spending ur energy hating on others. It’s only destroying ur own soul. “Let him who is without sin among you be the first to throw a stone” John 8:7

One commenter seemed shocked (I assume sarcastically) that the Kardashians read the Bible, and Khloe responded by pointing out the Kardashian family is no stranger to either the Bible or church:

@Chuksypablo shocked? Yes we do and we go to church and bible studies on weds nights. Gasp! Mind blown!!!!??? Stop assuming you know us

Ah–but, of course, the denizens of the rock tossing arena that is social media continued to throw stones, which I assume is what inspired this rather non-Bible-friendly response from Khloe: 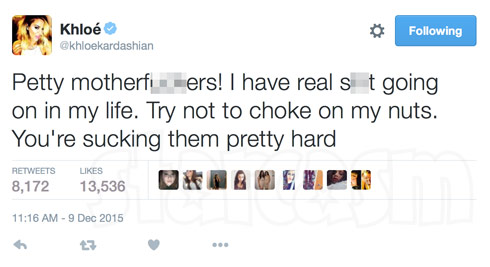 Khloe later translated her message into sign language just in case, adding the caption “Forever my mood ???” [NOTE: Photo has been censored] 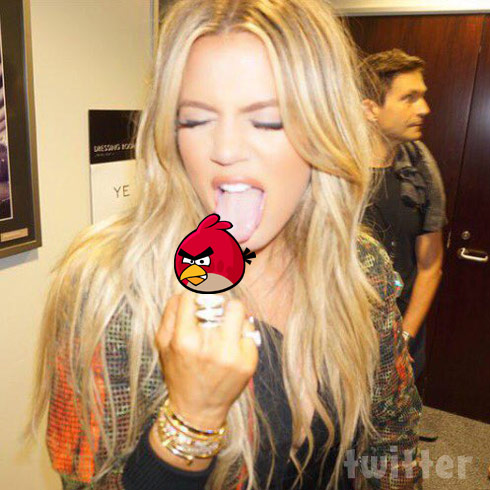 A woman named Charity responded to Khloe’s “Angry Bird” promotion by saying that Khloe looked “abit too high.” Khoe was a little more G-rated in her response to this one:

@WahomeCharity I look high? Hummm well I don’t do drugs do I guess that’s just how I look love. ?? — Khloé (@khloekardashian) December 9, 2015

And another pointed out that Khloe should tone down her tweets because children follow her. Khloe seemed unfazed:

@MauerRealty So unfollow me. Simple

Khloe’s most recent tweets have mostly been joyful responses to positive reactions to her outbursts, so hopefully the venting helped. For what it’s worth, it was certainly entertaining for me! #KhloeKrush