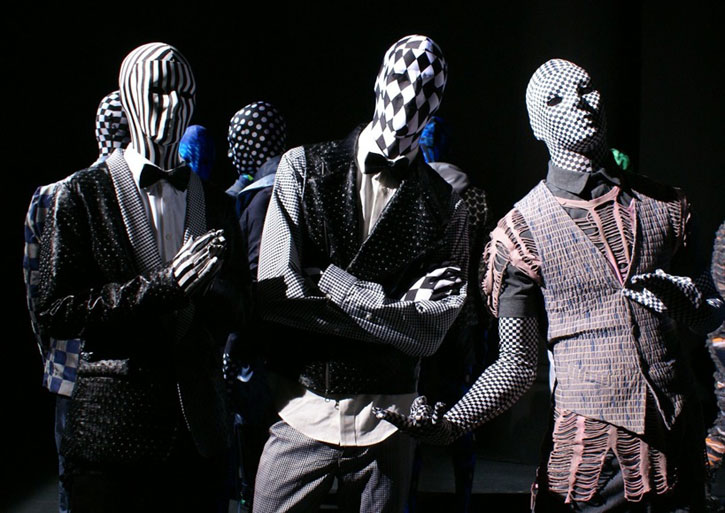 Nicolas Petrou was an out-there designer that Kelly Cutrone took a risk on because he deals in the artsy, avant-gard style close to her heart. Her PR company People’s Revolution decided to put on his show despite budget issues and other red flags, which involved the models putting on wool body socks before they donned polka-dot vests and ripped pink shirts.

They invited mad press to the event including V, Interview, Esqurie, GQ, The Wall Street Journal, and the high priestess of fashion reporting, Women’s Wear Daily. Many of the editors at the event laughed at the performance art Nicolas presented, but apparently it went over well with the Japanese.

Petrou continued to dig his own hole by behaving badly the Women’s Wear Daily editor. When he was questioned about his exchange, he scoffed as WWD, saying the editor was patronizing. “Women’s Wear Daily??? Who gives a f*ck?!?” he exclaimed. PR publicist Emily Bungert really turned off at that remark, especially since they had put together this show and press as a favor and for a smaller budget than they’re used to. To the camera she explains that Nicolas’s gaff will end up costing him a great deal more than further business with People’s Revolution: ” If you want to be a legitimate designer in this industry, you need to respect Women’s Wear Daily.”

Unfortunately, the feeling was mutual, and Nicolas Petrou ended up stiffing People’s Revolution for their work promoting him. Even though some of the leading fashion and men’s wear publications were there, he was probably just bitter over the poor reception of his work. Kelly Cutrone threatened to sue him for the money owed over the phone, but decided to just eat the money and talk about about how he steal money from publicists on television and with her publicist friends.

Although Nicolas Petrou managed to steal services from People’s Revolution, he still benefits from the work they did for him, displaying the images taken from this event on his website and proclaiming the list of publications who reviewed him on his About page, which is press that People’s Revolution helped score.

CLICK HERE to read more about the father of Kelly Cutrone’s daughter, Ava

CLICK HERE to read about Kelly’s relationship with Ashely Dupre