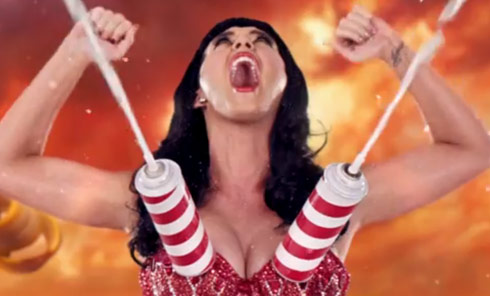 As of late, it seems like it’s been a competition to see which female pop star can out naked-sexy the other. From Rihanna’s stripper-inspired “Pour It Up” video to Britney’s S&M whip-wielding, in which the singer admitted it went too far and she had to edit over half the footage, on “Work B**ch” and, of course, Miley Cyrus’ demolition machinery swinging in the buff, many have chimed in on the current state of sex and commerce for female celebrities. Now one of their own, Katy Perry, has tossed in her two cents worth in regards to a perceived need to tone down all the nudity.

Parks and Recreation star Rashida Jones kind of summed up a lot of people’s opinions on all of this in a recent Twitter rant in which she quipped, “This week’s celeb news takeaway: she who comes closest to showing the actual inside of her vagina is most popular.” Perry, who’s been known to use her playful sex-appeal to help promote her many ventures and was even criticized for her cleavage-filled appearance on Sesame Street of all places, spoke with NPR and addressed the hot topic about too much exposed hotness:

And a lot of people see me as a role model but I’d like to kind of turn that around and say I appreciate that but I’d like to be seen as an inspiration. Because a role model, I think, will fail you. I mean, I couldn’t tell kids when it’s time for them to try things or do things. I mean, that’s not my role. But, you know, it’s funny. I do see myself becoming this, whatever, inspiration out of default right now, ’cause it’s such a strange world. Like females in pop – everybody’s getting naked. I mean, I’ve been naked before but I don’t feel like I have to always get naked to be noticed.

During her lament about the situation, Perry didn’t go as far as to single any one performer out. She added:

I’m not talking about anyone in particular. I’m talking about all of them. I mean, it’s like everybody’s so naked. It’s like put it away. We know you’ve got it. I got it too. I’ve taken it off for – I’ve taken it out here and there. And I’m not necessarily judging. I’m just saying sometimes it’s nice to play that card but also it’s nice to play other cards. And I know I have that sexy card in my deck but I don’t always have to use that card.

In the end, perhaps Katy’s point is about maintaining a balance. Most are familiar with the Miley vs. Sinead O’Connor open letter war of strangeness that emerged. The importance that can be gleaned from all of that was what’s most important for these young women who certainly have it, as Katy points out, is to be in control of how, when and where it’s used and that they’re not being manipulated to use their bodies beyond the point of what they, themselves, are comfortable with.

It kinda sounds like that’s the point the “Roar” singer is making even if there are many who would rather hear it from another artist.