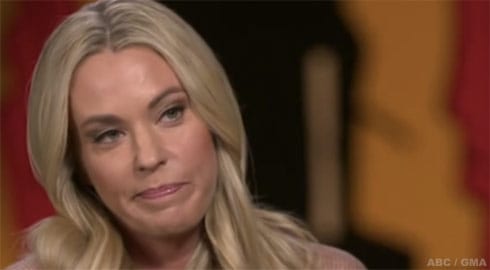 Kate Gosselin sat down for a candid interview with Good Morning America and directly addressed reports that she abused her son Collin. She also responded to ex-husband Jon Gosselin’s claim that she is purposefully hiding their son from him.

Here’s the transcript of the exchange between GMA’s Amy Robach and the reality TV star:

Amy: We see your son Collin in this new season but a few months ago you revealed that he is away seeking treatment for educational and social challenges. How did you come to that decision? It had to be a really tough one.

Kate: It was not even really a choice. It was on the advice of his doctors and it had to happen.

Amy: How is he doing?

Kate: He’s plodding along and we are too, but it was definitely necessary. I’ll go to the ends of the earth for the best for each one of them. This is the best thing I can do for him right now, and so that comforts me.

Amy: There are reports that Collin told staffers at his treatment facility that he was abused by you and child services reportedly opened an investigation.

Amy: So, they’re all unfounded?

Kate: We are both court ordered not to speak about the care and custody of our children in detail. I’ve known all along where he is but the world doesn’t know and… I’ll leave it at that.

Amy: Jon says he’s going to court to get a judge to force you to reveal Collin’s whereabouts. Are you prepared to take him on legally?

Kate: I’ve lost track of how many times he’s said that. I’m really focused less on what Jon has to say… I don’t really pay attention to be honest.

Jon’s attorney told ABC news, “The whole story is not being told … [Jon] is a loving and caring father who is acting within the scope of the law to do what is best for his kids.”

Kate Plus 8 returns for a 5th season tomorrow night on TLC.

Kate Gosselin says only some of her kids visit Jon Gosselin, they want her to remarry

PHOTO Jon Gosselin is a stripper in Atlantic City now