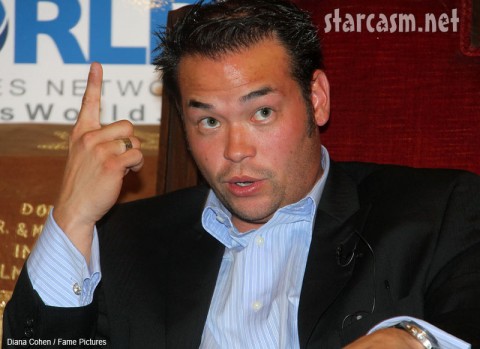 Jon Gosselin has been expressing his feelings about his life and stuff a bunch lately, see this dragon tattoo for an example, and now all of these deep Jon-minus-nine emo revelations will be revealed in a (gasp) book.  Radar is reporting that the reality star turned dude who shows up smoking weed with some chick and always looks kind of  funny in paparazzi photos guy is penning a pseudo-memoir to be titled, A Slice Of Life: Jon Gosselin’s Story.

Jon isn’t alone in this venture as his life coach, Sylvia Lafair, is assisting him with the writing and the deep personal excavation into the mind,heart and soul of Jon Gosselin.  According to Lafair the book will deal with shocking unknown details about Jon’s life such as:

His journey from being a relative unknown to reality TV patriarch and regular tabloid fodder.  The book is about having eight kids all at once when he was under the age of 30.”

Did that stuff really happen to Jon?  A Slice of Life will also deal with some issues that his life coach,at $10,000 a mountain trip of course, has been helping Jon with such as:

“It includes some of the lessons that Jon has been learning with helpful hints on how he is working to reframe his relationship with his family including his two brothers and his mother.  It also explores how the death of his father affected him.”

I’m no book market mastermind but I am going to guess that Jon’s book, much like Jon’s life, will not fare as well as Kate’s has.  There is no word yet as to when the book will be released but as I like to do, here are some alternate title suggestions for Jon Gosselin’s pseudo-memoir.

Jon Minus Nine
Hey Kate Have You Seen My Killer Dragon Shirt and My Life: The Jon Gosselin Story
Jon, We Hardly Knew Ye
Dude, I’ve Got a Bunch of Kids Dude: The Real Jon Gosselin
Random Unintentionally Funny Photos and Other Things I’m Good At: A Jon Gosselin Memoir

Tiger Woods withdrew from the players for a bulging what!?!